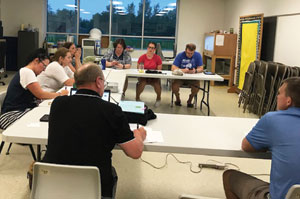 The board discussed the ongoing longterm facility maintenance (indoor air quality) project.  Superintendent Hecimovich informed the board that, “We discovered that we have a water issue in the basement, not caused by any previous construction, just caused by the age of the building.”  He said there are two solutions the board can consider, with the first being a “quick fix” of installing some vents in the walls, at a cost of roughly $15,000.  He said with the quick fix, “The issue is, you have a high potential for mold development,” especially in a wet year.  He added that, “It has been seeping for years.  There are some cracks that have developed.”

The other solution Hecimovich mentioned was excavating outside and waterproofing the exterior, at a cost of roughly $75,000.  Horsman pointed out that the $75,000 figure was based on a “worst case everything” estimate from the contractor, so the actual cost of this option may be less.  It was mentioned that whichever solution the board chooses, it will paid for using available “contingency funds” within the project budget.

Horsman voiced her opinion that, as a taxpayer, she feels the school district should always assure that facilities are constructed and maintained to the best of the board’s ability within available funding.  She and Emig also said they would expect that if the board chose the “quick fix” and a later abatement were needed, the cost would end up being higher.  The issue will be an action item on the agenda for the board’s July 15 meeting.

Hecimovich informed the board that an issue was also discovered regarding previous construction that was apparently not done in accordance with the full compliance with the constructions specifications.  He said Kingsland will work with the district’s attorney to contact the contractor to see what can be done.

The board discussed planned communications related to the operating levy referendum.  Regarding Kingsland’s referendum informational website, Rader said he feels the website is “good to go” but said he will continue to welcome feedback and make adjustments as needed.  The board also discussed participating in parades this summer/fall, and attending city council and township meetings this fall to get the word out about the referendum.

The board plans to have board members, individually or in pairs, come to some city and township meetings, to inform citizens about the referendum.  Hecimovich said the board will need to decide which townships to go to, since he said some townships have “just a sliver” that is within the Kingsland school district.

The board discussed a number of annual designations and fees that the board must decide upon.  Starting in January 2020, most of these will be decided at the start of the calendar year rather than in the summer.

Hecimovich recommended no changes in the Miscellaneous Fees schedule.  Principal Klavetter explained that, due to state guidelines, there will be a new schedule of fees for Student/Adult Meal Prices.  He said the fees will now be determined on set tiers (Kindergarten, Grades 1-5, Grades 6-8, Grades 9-12, and Adult).  He said the fees will be different for each group because different portion sizes will be offered to each group.  He said because of this, it will create challenges in the scheduling of lunch periods.  No decision was reached on how to best schedule lunch periods, but Klavetter said this is something he’ll be working on.