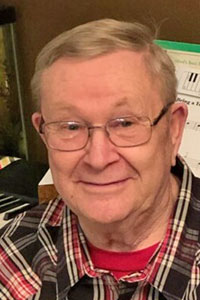 Joseph Charles Langlie of Ostrander, a former employee of Martz Furniture, LeRoy, Minn., a farmer and carpenter died Wednesday, August 25, 2021, at the age of 83 at St. Marys hospital in Rochester.

He was preceded in death by his sister Shirley Ann Miller, and infant sister Barbara.

Joseph Langlie was born January 17, 1938, in Ostrander, Minn., to Julia and O.M Langlie.  He graduated from Spring Valley High School in 1955.

On December 11, 1971, he married Judy Langlie (Dohlman) at the Presbyterian Church in LeRoy, Minn. They purchased a farm near Ostrander where they lived until relocating in October of 2016 to Wildwood Grove in LeRoy, Minn.  Joe moved to Care and Rehab in Ostrander, Minn., on March 30, 2021, where he resided until his death.

Joe was a charter member of Ostrander Trinity Lutheran Church, where he served on the church council and was a willing volunteer.  He and Judy spent many hours together making rosettes for the annual church bazaar, as well as preparing food to serve at church gatherings. One rarely saw Joe without Judy at any activity. Joe was a member of the Ostrander Cemetery board and both the LeRoy and Spring Valley Saddle Clubs.  He enjoyed many trail rides with Judy and other horse enthusiasts. He was country western at heart and enjoyed country music and Cowboy Church.  He found great joy in baking pies and other delicious items.  Joe enjoyed working on his farm. He loved playing 500 card games at family gatherings. He was a devoted uncle and will be missed deeply by family and friends.

The funeral for Joseph Langlie as held at 1:30 p.m. on Monday, August 30 at Trinity Evangelical Lutheran Church in Ostrander, with Rev. Bakker officiating. Burial took place at the Ostrander Cemetery.

Memorials may be given to the Ostrander Cemetery Association or Trinity Evangelical Lutheran Church, Ostrander, Minn.

Condolences may be left at www.Hindtfuneralhomes.com