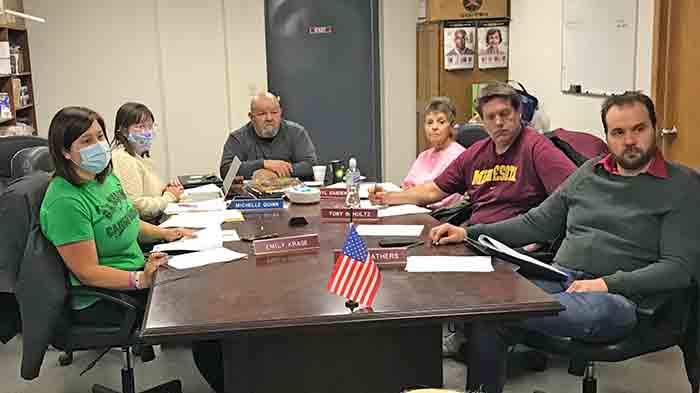 At their regular January 10 meeting, the Houston City Council passed a resolution to rezone lots 6-9 in the Westgate Industrial Park from Industrial 1 to Commercial C-2. Kort Kistler, sales manager at Apple Auto explained that his company was working on purchasing the parcels, but wanted to make sure the zoning would allow for his business. He informed the council that the company needed more room and plans on doing detailing, restorations, auto body work, and auto sales at the location. The council felt the business would complement other businesses on the corridor.

Since this was the first meeting of the year, the council reviewed appointments and positions; Mayor David Olson remains mayor, serving in that position since 2017. Most committee positions remained the same with the exception of Kelly Porter withdrawing from the Park & Rec Board.

Since Bremer Bank will be closing its Houston location effective April 15, 2022, the council needed to declare another bank its official depository. Terry Chiglo, representing the Rushford State Bank, informed the council that they are growing and would like to be chosen as the depository. He shared that the bank would provide a free courier service and noted that the bank was teaching a class to the Houston Scouts. When asked about community contributions, Chiglo responded that the State Bank was very competitive in that as well as paying staff to donate time to volunteer. He added that the bank was considering coming to the nursing home to serve its residents.

When City Administrator Michelle Quinn mentioned the work of switching banks, Chiglo offered that the bank had switch packets available and was willing to send staff to assist with the process. The council felt that the State Bank would be the most likely to put a bank branch back in the city. Ultimately, the council chose Rushford State Bank as the depository, and will maintain Bremer for 60 days as they transition.

The council gratefully accepted the year’s donations, noting that once again the Legion had been very generous, donating $13,000. The Mask Girls’ donation was out of the ordinary; a group of ladies who had sewn face masks during COVID had donated their profits to emergency services, splitting the $1,170 evenly between the police, fire and ambulance departments.

With no applicants for the city janitorial position, the council chose to enter into an agreement with ABC (Ability Building Community) for janitorial service. ABC had not been operating recently due to the pandemic, but is now again up and running. Quinn pointed out that a suitable candidate for a regular hire could be found by using ABC. If the arrangement doesn’t work, the city can opt out of the agreement.

After interviews, the position of police officer has been filled by Calvin Nagle.

The hiring of a nature center assistant has been postponed until next month; a second applicant has yet to be interviewed.

The Chamber of Commerce intends to hire their own director. The city needs to check with the auditor on whether it would be okay to handle the hire this way with the city contributing to the salary as it has in the past.

The position of summer rec director is still open and applications are being accepted.

• Heard From Matt Mohs that a lead pipe inventory was being completed following EPA guideline; a grant may be in the offing with planned funding of 50% and possibly 100% for repairs;

• Heard from librarian Liz Gibson-Gasset that the Houston County librarians had asked and received a $20,000 increase in funding from the county; Gibson-Gasset hopes to use Houston’s share to increase the assistant librarian’s pay. The matter needs to go through the personnel committee first before action can be taken. Gibson-Gasset also shared the month-long celebration details planned for the 20th “birthday” of the library in February.

The next Houston City Council meeting will be February 14 in the council chambers at city hall at 6 p.m. The public is welcome to attend.