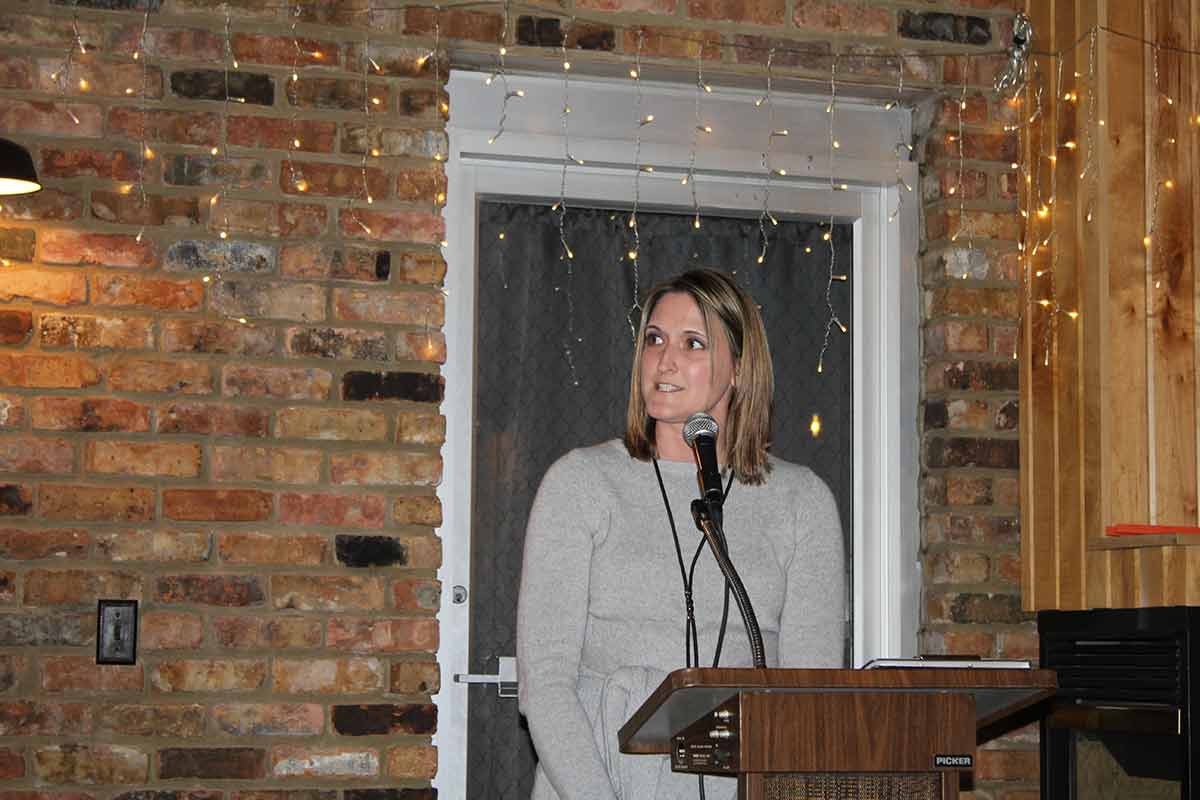 On Monday, March 28, 2022, with a crowd of more than 100 attendees at the Branding Iron in Preston, Minn., the (PACF) Preston Area Community Foundation celebrated 25 years of making a difference in the county seat.

The evening started out with casual conversations, bids on the silent auction items, and then a first class dinner was served for a first class event.

PACF Chairperson Abbey Hellickson welcomed the attendees, sharing a year in review for 2021. There was no dinner event in 2020, due to COVID. This was the first event held in over two years.

The biggest fundraisers for PACF are the annual dinner and silent auction along with Give To The Max Day in November each year.

Hellickson shared that the organization has had to adapt significantly over the past couple of years, just like everyone else. In 2020, one of the directors, Barb Mielke, suggested the PACF conduct an online auction in conjunction with Give To The Max Day, which yielded a combined $32,000 for that one-day event. For 2021, the organization focused strictly on the Give To Max Day event without the online auction, and they finished the day with $25,000.

A list of organizations that have benefited from donations made by PACF was provided at each table for attendees to review. There were 54 grants awarded, enriching the lives of people living in Fountain, Lanesboro, Preston, Harmony, and Lanesboro.

One of the founders of the Preston Area Community Foundation and CEO of F&M Community Bank, Dan Christianson, spoke about when his father, Al Christianson, originally approached the City of Preston in the 1970s to provide funding for projects for the betterment of the community.

According to Dan Christianson, in 1994, there was roughly $75,000 sitting in this city fund that had been sitting there for awhile.

It was at that time that Christianson felt it would be a good move for the City of Preston to move those funds into a community foundation under the umbrella of the (SMIF) Southern Minnesota Community Foundation. Making that move would transfer important responsibilities to SMIF for the benefit of the PACF, such as accounting, regulatory filings, and tax filings. This move would also open the PACF up to matching funds that SMIF had access to with grant programs.

The PACF reached $1.1 million at the end of the 2021 calendar year – another new high for PACF.

Today, there are 30 community foundations working under the umbrella of SMIF.

Tim Penny, CEO and President of SMIF was also present and echoed Christianson’s references to PACF and the partnership with SMIF. He also complimented the organization on putting together such a fine event every year.

The keynote speaker was Associate Extension Professor Jennifer Hawkins, with an emphasis on community economics with the University of Minnesota Extension Regional Center in Rochester, Minn.

While some rural communities feel like they are losing ground in many areas, Hawkins shared data that said otherwise.

“I love data. It’s unbiased. Data grounds us, but doesn’t tell the whole story. It’s up to us to consider the context,” shared Hawkins.

Hawkins grew up in Alexandria, Minn., and left after high school to attend the University of Minnesota.

She’s been listening to the rural narrative of decline for many years, concerned that it could be a self-fulfilling prophecy for some.

Hawkins referenced a book written in the early 2000s, titled Hollowing Out the Middle: The Rural Brain Drain and What It Means for America, which pointed to adults in each community who were playing a pivotal role in the town’s decline by pushing the best and brightest young people to leave. She posed the question, “Why stay in a dying town?”

“I’m happy to share that the numbers tell us that many small communities are in fact holding their own and even growing. There is a rural renaissance underway,” shared Hawkins.

She continued, “Not all communities are benefiting. Those that are experiencing a renaissance are those that come together to be proactive in making their town strong. A place that they want to live and a place that others are attracted to.”

Southeast Minnesota has grown 45,000 people between 2000 and 2020, with 80% of that growth taking place in Olmsted County. There’s been slight growth in Fillmore County, as well.

According to Hawkins, state demographers project the region’s population will continue to grow for the remainder of this decade but will decline slightly between 2030 and 2040. There will be growth in the 25-44, and under age five groups. The age 45 to 74 category will shrink as the baby boomers age into the 75+ category.

The top employment sectors in 2020 were healthcare, social assistance, manufacturing, and retail trade. “Healthcare jobs are expected to continue to increase over the next several years, but manufacturing and retail are projected to fall slightly or remain unchanged,” presented Hawkins.

In terms of succession, Hawkins noted the transitioning of the baby boomer generation into retirement. She asked, “What happens to the businesses and organizations that they lead?”

Hawkins began to answer that question, “U.S. Census estimated that 67% of small businesses were owned by baby boomers in 2012. The Exit Planning Institute’s business owner survey revealed that 80% of business owners don’t have a written transition plan.”

Successful transitions shared several common traits. The owners started planning several years in advance. They stayed on to mentor and guide the buyer for some period of time. Attention was paid to transfer of leadership in addition to financial elements of the transaction. The community rallied around and embraced the new owner.

Hawkins then touched on entrepreneurship. “A culture that is supportive and encouraging of entrepreneurs is a critical ingredient. Entrepreneurship can be risky and a discouraging culture is an added barrier to stepping out and taking that risk.”

“Preston is building from a position of strength. Small businesses like Urban Artifacts, Blossom Hill Orchard, and Trout City Brewing and so many others are a testament to the entrepreneurial spirit here in the area,” she added.

She continued, “According to the U.S. Census, new business filings topped 5.4 million last year, a record number. Now more than ever, we have an opportunity to lean into entrepreneurship and small business creation as an important strategy for economic prosperity. What might that look like?”

Hawkins said that we can all play a role. “Promote your community’s entrepreneurs to anyone that will listen. Be a customer, shop locally. Be supportive of new ideas, even when you might think those ideas are wild. Support those who have tried, even if their first endeavor doesn’t work out. Some say the road to success is paved with failure. Connect entrepreneurs with each other and with people you know. Or become a small business owner. Unleash your idea.”

How welcoming is your community? Hawkins provoked that thought with attendees for the sake of economic development. She explained the importance of being a welcoming community to locals and newcomers, and how that can attract more people to the region.

Hawkins concluded with a comparison between finite games and infinite games, referencing a business professor and author by the name of Adam Grant.

In a finite game like monopoly, there is a winner and a loser. In an infinite game, the players change all the time, the rules are unclear or changing, and the goal is not to win, but to keep the game going by continuing to play. It is about advancing from your former position but not relative to the position of your neighbor.

She concluded with,“I believe that community development is an infinite game. As long as you continue to play, advance from your past position, you’re successful.”