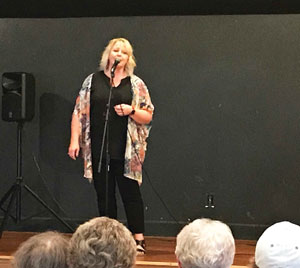 As a part of Harmony’s weeklong 4th of July celebration, the third annual Harmony Sings event was held on Sunday, June 30 at the Old Legion Hall in Harmony, with approximately 70 people on hand.  The event is organized by the Harmony Chamber of Commerce, and is affiliated with a statewide competition known as Minnesota Sings.  One of those on hand was Chuck Spavin, representing Minnesota Sings.

Chuck explained that, “I’m what they call the Lead Volunteer for Minnesota Sings.  In reality, I’m the founder too, but we’re all volunteers.  This is the tenth year overall.  The first four years the event was called Hastings Sings… then after four years we decided to take it statewide.”  Each city holding a local “Sings” event can send their first and second place winners from each of the two age groups on to compete in the statewide Minnesota Sings event, which will be held this year on September 28 and 29 in Woodbury.  Last year, Minnesota Sings included a total of 60 vocalists, from 35 different cities.

This year’s Harmony Sings event, which welcomes amateur vocalists who are Harmony residents, was judged by Diana Lawrence, Jeff Thauwald, and Heidi Dybing.  Gerri Nielsen served as emcee.  There were six contestants total, with four in the 15-25 (youth) age bracket, and two singers in the 26+ (adult) group.

The winner in each each group receives $250 in Harmony Bucks, with second place receiving $100.  In the youth group (15-25 years), Krissie Biel won, singing “Ex’s and Oh’s,” with Ellie Liew placing second, singing “Til it Happens to You.”  Kylie Fenton and Kayla Biel tied for the alternate (third) position, meaning they will be called upon if Krissie and/or Ellie are unable to compete at Minnesota Sings. In the adult group (26+), Jess Hemenway was the champion, performing “Make You Feel My Love,” while Jacque Ryan finished second, singing “Wade in the Water.”

Kayla and Krissie Biel had a friendly “sibling rivalry” going in the event, as the sisters both competed in the youth category.  Kayla, who began singing in seventh grade choir and now sings in the women’s choir at SDSU, said, “It’s a great program.  I’m glad that a little town like Harmony can put it on and continue to grow it every year.  It’s also a great experience for singers.”  This was Kayla’s second year competing in Harmony Sings.

Regarding  her own participation, Krissie said it was her first year competing in Harmony Sings, adding, “I’m really excited about having the opportunity of going up to Minnesota Sings and being able to continue this experience.”  Before her first place performance at Harmony Sings, Krissie had competed in the Houston talent show and Howard County Fair (Cresco, Iowa) talent show earlier this summer, placing third in each.

Chuck mentioned that the prizes at Minnesota Sings are significant, stating, “If you win first place at Minnesota Sings this year, you would win $3,000 for yourself, and then you’d also win a five-hour recording session at one of the major recording studios in the Twin Cities… but then in addition to that, they also get a bonus check for $1,000 to bring back to their town and they get to pick what charity in town gets that $1,000.  And then they also get another bonus check for $1,000 that they get to bring back and give to whoever was responsible for putting on the local ‘Sings’ event.”

Chuck summarized, “Our longterm goal is to have 100 cities across Minnesota compete.  Last year, we had 35 cities and a total of 60 vocalists.”  He also added, “There is always a new first place winner at Minnesota Sings.  The reason being is, once you win first place, you can never compete again.”  Chuck said the singers perform a wide variety of musical styles, including “everything from Broadway to rock & roll, swing, jazz, blues, country, country rock, contemporary Christian, arias from operas, and much more.”  He welcomes anyone interested to check out the website, Minnesotasings.com.