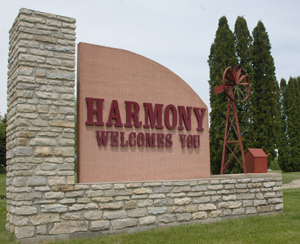 A public hearing was held at the December 14 Harmony City Council meeting to discuss a request from three property owners to vacate Center Street past 3rd Ave. W. City Administrator Devin Swanberg noted that in terms of future planning for a city, it’s generally a bad idea to vacate a street as it could cause issues later. If the city were to decide to develop the land behind the homes, it would first have to purchase the land back from the homeowners. City Attorney Greg Schieber said that an argument could be made both ways as the property value could increase if the homeowners developed the land further. Resolution 21-22 was adopted to deny the vacation request.

Proposals were received for the city’s refuse and recycling contract from S&S Sanitation, Hanson Waste Removal and Recycling, Richard’s Sanitation LLC, Waste Management, and Harter’s. Steve Sagen noted that he had spoken to multiple people around town and the general consensus was that most people would prefer garbage totes over the existing garbage bag system. The committee compared the proposals and recommended that the council approve the contract with Harter’s, which they did. The service will start on April 1 and elderly residents will have the option of calling Harter’s to sign up for door pickup.

The utility fees and rates were reviewed. Currently the late fee is 1.5% which needs to be raised as that doesn’t even cover postage. Swanberg has spoken with surrounding communities and found that many have a 10% late fee. He suggested raising Harmony’s to around 5%. A 3.64% increase was proposed for water, 3.48% for sewer, 7.14% for refuse, recycling, and storm water, and 2.2% for electricity with a total increase overall of 3.3%. The matter was tabled until the January meeting as the late fee increase requires an ordinance change first.

As a result of the wage study done over the last year, a new salary grid was presented to the council which they approved effective January, 2022. “They (city employees) thank you for your support on this,” Swanberg said.

An estimate from Servpro for a cleaning in the community center gym was received. Quotes were given for floor, walls, and ceiling with a reduced cost for doing all three. The council decided that the walls and ceiling needed to be done. A motion was approved to apply for a $12,500 grant for the community foundation to cover the cleaning and painting.

Swanberg updated the council on the internet grant that the city had been awarded. Unfortunately, they were not able to find a contractor to do the work in the time frame provided. Four other cities in Minnesota were also awarded the same grant and are having the same struggles. Swanberg is redoing the application and will keep the council updated on the progress.

Pay request #3 from Generation X was approved. The final payment for the street project will not be paid until everything is completed to satisfaction.

Chris Giesen was present at the meeting to discuss the Downtown Revitalization project with the council. The goal is to fix up the downtown buildings one at a time with $40,000 being set aside in the EDA budget each year to do so. “I think this is a very inventive program that will highlight how Harmony invests in its downtown community,” Giesen stated. A number of applications were received this year and the EDA decided to start with On the Crunchy Side which is in need of tuckpointing and upper window replacement. The project will begin in the spring of 2022.

The Park Board improved increases for campground fees. They also received and approved a proposal for the picnic shelter/bathroom that is to be built in Harmony Park.

Sandy Strozyk applied for and received a $10,000 grant for the splash pad. The features and plumbing parts will be ordered in the next month so construction can begin this year.

The next Harmony City Council meeting will be held on January 11 at 7 pm.