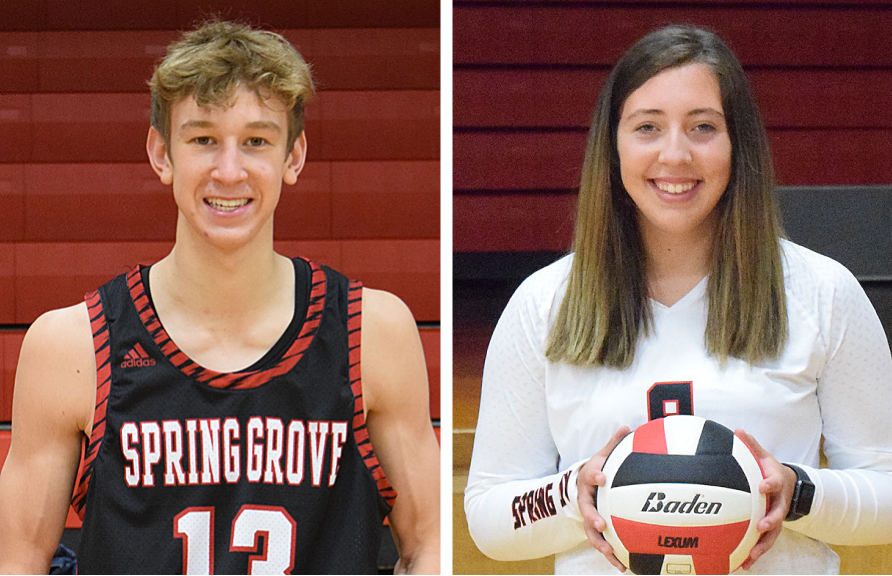 Senior Caden Grinde and sophomore Addyson McHugh were selected by the Spring Grove High School coaches as the Male and Female Athletes of the Year, respectively, for the school year 2020-21. McHugh is the first sophomore girl and joins Sam Morken (2003) as the only sophomores to receive the honor.

McHugh, despite her youth, was a volleyball All-Southeast Conference selection for the second season. The 5-foot, 10-inch middle hitter was – for the second straight season – the Lions’ leading scorer, including 136 kills while contributing to 32 scoring blocks (21 solo). She led Spring Grove in kills in 10 of the 12 matches and scored with a block in every match. McHugh served 92% with nearly three times as many aces (32) as errors (11). She shared the team Heart Award as voted by her volleyball teammates.

As a basketball forward, McHugh ranked second in four statistical categories while averaging 8.4 points, 6.2 rebounds and 2.3 steals per game along with 48.9% success at the free throw line. She earned her third varsity letter in volleyball and second letter in basketball.

Grinde, who will play college basketball, was showered with multiple honors for his performances on both the hardwood court and the gridiron grass, including All-Area acclaim in both sports. In football, he was All-Area Second Team Defense as a linebacker, All-District for a second season and also repeated as both Spring Grove’s Most Valuable Player and Defensive Player of the Year. He was also an Academic All-District football scholar.

In basketball, Grinde was Southeast Conference Player of the Year, All-Area Second Team, an All-Conference selection for a third year and named to the All-Journal Team (Fillmore County Journal). He was voted the Lions’ Most Valuable Player for the second season and won the Hustle Award for a third year. The 6-foot-4, 170-pound standout lettered four times in basketball and three times in football.

Last football season, Grinde led the Lions in four statistical categories – tackles (125), solo tackles (53), pass receptions (41) and receiving yards (419). After leading the sub-district in receptions as a junior, he often faced double-team coverage as a senior. However, he still shared the league lead in receptions and again was second in receiving yardage. Grinde averaged 31.5 yards while punting and 15.3 yards while returning kickoffs in addition to holding for extra-point kicks.

Grinde moved up to third on the Lion all-time reception chart with 119 catches, one of only three to surpass 100, and graduates fifth in career receiving yardage (1,450). His 13 receptions against Houston in 2019 is the second-best, single-game total in the record book. For the second season, he surpassed 100 tackles and graduates tied for 18th on the career tackle list (257).

Despite the Lions playing a pandemic-abbreviated 15-game schedule, Grinde still graduates while ranking fifth in career steals (261), seventh in career blocked shots (52) and 11th in career points (1,150), 12th in 3-point baskets (105), 13th in hustle points (238) and 14th in made free throws (155). He signed to play Division II college basketball at Upper Iowa University.

The Spring Grove Athlete of the Year Award was first bestowed in 1966. A separate division for girls was added when girls sports began in school year 1973-74. Beginning in 1992-93, the award was limited to seniors until 2003, when underclassmen have again been eligible.