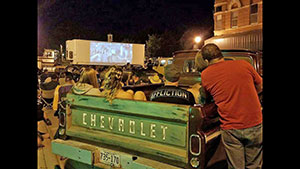 The fascination of automobiles coupled with a desire to positively influence Spring Valley’s downtown image inspired Greg Melartin to create an event  in 2017 called Fins and Films.

“I moved back to Spring Valley in 2015 and noticed that the downtown area was in a slump.

“I am a car guy through and through, absolutely loving the automobile and the culture.  I thought that bringing the car community into the area would help spotlight the downtown.” explains Melartin.  Finding the best way to market his idea came from reminiscing about the drive-in that once stood on the northwest side of town and wanting to experience the atmosphere that it created.  Melartin “batted the idea around in my head for around a year.”

Getting started involved looking for a fiscal agent to assist in managing the funds while piecing together his own entity to manage needed funds, which meant approaching several organizations.  “Julie Mlinar took the idea to the Chamber of Commerce.  Jeff Thauwald was on the Chamber at the time and he absolutely latched onto the idea of Fins and Films.”

Thauwald comments, “When Greg approached the Chamber with his vision of Fins and Films, I had no idea that there were so many people who participated in classic car shows.  That plus the drive-in movie with the classic cars, popcorn and people gathered together on a summer night make for a great event.”

Melartin continues, “The Chamber agreed to be the fiscal agent for Fins and Films with the requirement that I set up a board, which consisted of Julie Mlinar, Kelcy Mitchell, Dave Phillips, Linda Bennett, Jeff Thauwald, Stephanie Osterhus, and myself.   Fins and Films gained 501 C3 status based on the cultural and educational aspects of the event.”

After things were in order with the  Chamber, Greg walked down to Chateau Di Chic and asked Jenn Slifka if she’d handle the pinup show.  Jenn explains, “We do a vintage pinup show where women dress up in vintage clothing and we do a runway show.  They all have names (i.e. Smokin’ Gun Sally) and they walk the stage and we have a panel who votes the best pinup as Ms. Fins & Films.  They get a tiara and sash and they get to crown next year’s winner, as well as hand out trophies at the end of the event.  It is a lot of fun because people take it in different ways from 1950’s housewife to a modern rockabilly feel.  The pinup show is definitely a highlight of the entire event.”

Kelcy Mitchell adds, “Fins and Films is focused on bringing the community together with fun, creative ideas and events for people of all ages! We have the mini pinup show alongside our adult pinup show! Giving the kids a chance to see what the retro style of the ‘50s, ‘60s was all about! While still providing plenty of fun for adults!  Drive-in movie at dusk on Saturday features The Little Rascals. This is the fifth year Fins and Films have put on this event, and we hope to coordinate even more activities in the future!”

“There are a million tiny things that need to happen to make this event a success,” acknowledges Melartin, who began the planning for this year’s show in August 2020.  “Usually our first step is to break down tasks and assign them to people to accomplish – volunteers are always welcome.  We need to: gain approval from the city to close off streets and use different pieces of property,  line up musicians and sound techs, acquire movie licenses, find a trailer for a stage and one for the movie, set up concrete blocks for the burnouts, acquire insurance, set up the grass drags (open to anything pre-‘86) in the hay field behind Five Wynds Event Center, which Matt Kolling allows us to use.  I want to make it known that this wouldn’t happen without my team, the support of the city, and the generosity of the community.”

This is the first year for the Ron Merkel Crate Box Derby, designed after the King of the Hill soap box races. Todd and Jill Jones of ACE Hardware in Spring Valley offer wheel kits for building cars. People are able to get the dimensions from Spring Valley EDA, plus, loaner cars will be available.  “I am absolutely honored that this derby is being held during Fins and Films and thank Norma Merkel for naming the derby and giving us a green light for it.  Ron was a very good friend and mentor of mine.  I thank Shelly Skindelien for grabbing onto this event and resurrecting it,” remarks Greg.  The derby has three groups eligible for participation:  ages 6-9, ages 10-15 and an open class. To find out more about the Ron Merkel Crate Box Derby, see the video created by Justin Mlinar: www.facebook.com/DiscoverSpringValleyMN/videos/553091859384943.

The live music for this event is diverse and professional.  The first band taking the stage will be the Low Rats kicking off the musical part of Fins and Films. They are “a punk rock band with a landlocked surf rock undercurrent” from Minneapolis, whose “roots are planted in ‘60s, ‘70s garage rock and ‘80s punk.”

The headliner for Fins and Films is Light45, which is “a top-charting band from Rochester, Minn. They are pioneers of the ‘New Wave of Classic Rock’ – a genre that brings the best.”

On Saturday, July 31, performing between the mini pins and the pinup show, is R.hoggs who “is a singer/songwriter & performer, but his mother called him Bruce Tessmer.”  The music he plays reflects the experiences of his life which he wishes to share “with people who could use some encouragement, some cheering up, or a good ass whooping.” R.hogg will be a wonderful addition to the festivities.

Fins and Films is more than a car show and a movie.  Melartin comments,  “It is an automotive festival.  We have a cruise-in, a car show, kids and adult pinup shows, live music, a crate box derby, vintage camping, burnouts, grass drags, and it’s all for FREE!”

Fins and Films is always looking for volunteers, donations, sponsors, and new ideas to add to the event. Contact Greg Melartin at (507) 481-8308 and check Fins and Films out on Facebook.