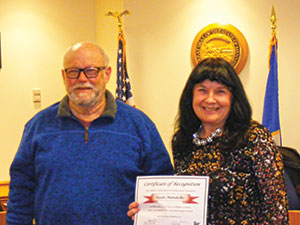 At the February 9 meeting of the Fillmore County Board, employees were recognized and thanked for their service to the county. Due to COVID the annual recognition event was mostly virtual.

Normally, each of those recognized would have been called up to receive a certificate. This year only Susan Mandelko (30 years), Randy Dahl and Marc Prestby (20 years), and Kristina Kohn (10 years) were at the meeting in person.

Hillery also recognized those who participated in Wellness and activities.

Hillery announced this year’s Safety Award. The award recognizes a pursuit of safety and also the encouragement of safety participation. The entire Public Health Department was recognized this year with the Safety Award. Each staff member will get a pullover jacket. Director of Nursing Jessica Erickson thanked the board and her staff for all the hard work to keep our community safe.

• Approval was given for the highway department to purchase a used trailer from Stewartville Truck Sales and Service for $10,580 which includes license and fees. The 1986 model trailer has been completely gone through and painted and will be used to move the dozer, skid loader and backhoe. The department had budgeted $20,000 for the purchase of a trailer.

• Final payments were approved to A-1 Excavating, Inc. for work completed in the City of Ostrander. One of the final payments was for the county’s portion of the project. The county acted as the sponsor for Local Road Improvement Program (LRIP) funding on behalf of the city. The LRIP grant was capped at $341,895.42.

• Approval was given to advertise for the surface reconditioning project on CASH 15 (from CSAH 44 down to Granger). Some safety work will be done on this project in the form of some bump outs (wider shoulder areas) to allow Amish buggies to pull over for a time. Commissioner Mitch Lentz voted no as he favored a six to eight-foot shoulder along the road for safety. This reconstruction would cost two to three times more.

• A resolution was approved stating the county supports and will sponsor the City of Lanesboro in its application for Local Road Improvement Program funding (in 2022) for the reconstruction of three city blocks, Coffee St., Rochelle Ave., and Beacon St.

A resolution was approved stating the county supports and will sponsor the City of Lanesboro in its application for Local Road Improvement Program funding (in 2022) for the reconstruction of Kirkwood St.

A resolution was approved stating the county supports and will sponsor the City of Spring Valley in its application for Local Road Improvement Program funding (in 2023) for the reconstruction of East Farmer Street (CSAH 8) along with Fillmore County. Bakke voted no.

County Engineer Ron Gregg explained there is a lot of competition for LRIP funding. All of these applications will be competing for the same money even though the projects are planned for different years.

• Shoreland NRBG grants for 2019 and 2020 were each closed out. Money expended for each year was $2,692. The board also approved the close out of the 2020 NRBG Septic Treatment Systems grant in the amount of $18,600. All funds were expended.

• A change in status was approved for Aimee Rodger from a two-year RN to a four-year RN, effective February 19.