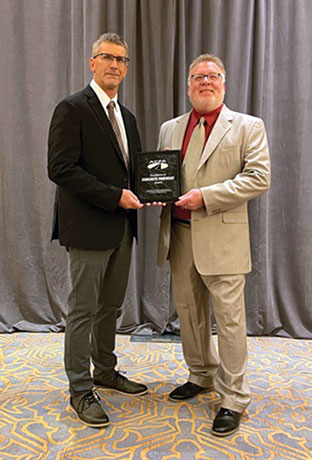 A resolution was adopted at the December 21 Fillmore County Board meeting declaring a state of emergency due to the December 15 wind/tornado events. Sheriff John DeGeorge said the storms resulted in significant public damage. There is an estimate of power damage in the amount of $570,000.

DeGeorge noted four tornados were identified just in Fillmore County. Strong straight line winds added to the damage. Preston endured the most damage within a municipality. Many farms suffered damage to outbuildings. Some homes did not escape unscathed. Six other counties in Minnesota are also expected to make disaster declarations.

The ACPA was founded in 1963. For 32 years now the ACPA features annual Excellence in Concrete Pavement Awards. Two projects are selected from each category. Fillmore County was honored for its “county road” project, a state aid concrete overlay project on CSAH 1 from Mower County line to the intersection of CSAH 39 and CSAH 1 (9.2 miles). The approximately 30-year-old bituminous road was overlayed with five inches of concrete during the 2020 planting season (May 11-June19).

Croell, Inc. is an ACPA member and was the contractor. The total project cost was about $3.7 million. CSAH 1 was closed to traffic during construction, which was completed in one pass. This section of road is the third heaviest traveled roadway in the county. The concrete overlay was chosen to provide a more durable, long lasting roadway requiring less maintenance.

•Approval was given for a detour agreement with MnDOT during the construction of trunk highway 43. The agreement identifies a list of recommended detour routes on county roads.

A resolution was adopted for the sponsorship of an application for federal funds in the city of Lanesboro for the construction of pedestrian sidewalks along trunk highway 250. There is no cost to the county.

Approval was given to enter into a cooperative agreement between the county and the city of Whalan for the reconstruction of CSAH 36 through the municipality.

•Drew Hatzenbihler, Sanitation, reviewed the first reading of the proposed Solid Waste Management 10-year plan. The plan is updated every 10 years. Approval of the plan is a several step process.

The board accepted a $2,000 grant from Carton Council’s Community Education Award. Hatzenbihler said the county has met the requirements for the grant.

•The non-union pay plan for 2022 with a 3% cost of living increase was approved.

The 2022 phone stipends were approved as presented. Commissioner Mitch Lentz voted no.

Intermittent Deputy Brooke Johnson was promoted to full time status effective December 21. Sheriff DeGeorge explained Johnson was chosen for the promotion because of her job performance and her ability to start right away with no additional training.

•The county’s fee schedule was again reviewed. Some language changes were made since the last meeting. Under the Assessor category a flat fee of $300 was approved for CDOWN data extract. This is increased from $45. County Assessor Jason McCaslin said he was comfortable with the $300 fee. The fee schedule in its entirety will be voted on at the January 4 meeting.

•Approval was given to use American Recovery Program Act (ARPA) funds to purchase office furniture and set up for the administration office at a cost of $9,956.37. Commissioner Marc Prestby voted no.

Additional positions using ARPA funding were again discussed. Approval was given to move an existing employee into an Income Maintenance position. ARPA funds will pay for the position for one year at a cost of about $75,000. This is a transition year as retirements are expected.

•RFPSs (Requests for Proposals) for Architectural Services for design and build of a new or remodeled jail must be submitted by January 25. A committee will review the proposals and select up to three firms that will be interviewed likely on February 15.

•David Kiehne, county recorder, submitted his salary request for 2022 in the amount of $78,125. He noted training of his possible successor is going well.

•Sheriff John DeGeorge submitted a salary request for his Chief Deputy Lance Boyum for 2022 in the amount of $100,093. This amount is 95% of an estimated average of regional salaries for this position.

DeGeorge submitted his salary request for 2022 in the amount of $116,174. This amount is 92% of an estimated average of regional salaries for this position.

•County Attorney Brett Corson submitted a 2022 salary request in the amount of $128,000. This is the average salary for similar size counties for his position.

•The 2022-2023 MOU between Region 10 contracting services and Fillmore County was approved with a 4% increase in cost.

The 2022 Children’s Mental Health Screening Grant between the county and the Minnesota Department of Human Services was approved. Social Services director Kevin Olson explained this is used for underinsured or uninsured children.

•Wellness budget money in the amount of $2,313 will not roll over into 2022. Approval was given to use $2,018.81 of the funds to purchase 175 cooler bags, one for every county employee, as a New Year gift for Wellness. The hope is to encourage employees to bring their lunch to work and to pack a healthy meal.

•January 4, 2022, will be the county’s annual meeting. Rep. Greg Davids and Senator Jeremy Miller are expected to be at this meeting to discuss legislative priorities.