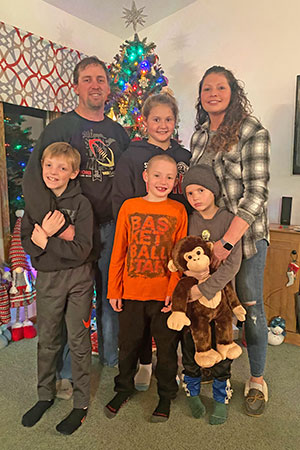 There is a new team in SE Minnesota, and over the past month it has grown rapidly. Grady’s Gladiators is comprised of family and friends, local businesses, area schools, non-profit organizations, and strangers that have stepped up to host fundraisers, donate money, support the fundraisers, and assist the family.

Seven-year-old Grady Lundgren, known for his full head of blond curly hair, is a second grader in Melissa Bratland’s class at Spring Grove. At the beginning of November, Grady was diagnosed with a rare form of cancer after complaining of a stomachache.

At the beginning of November, Dana got a call from school that Grady had a stomachache. In her mind, Dana thought, “Another one with a stomachache.” After discussing his belly ache with her sister and talking with the Mayo nurse hotline it sounded like appendicitis. Gundersen Clinic scheduled an appointment the same day at 4 p.m. Since the clinic was not able to do the needed tests that afternoon, mother and son were sent to the ER. Around 10 p.m. after an ultrasound and two CTs, Dana was taken out of the room into another room she was told that her son had a large mass on his right side which was pushing up on his lungs and that it was probably cancerous.

Gunderson contacted Mayo and Dana was informed that night that they needed to go to Rochester immediately; the start of an 11-day stay.

After ruling out the usual suspects the doctors came back, and Dana was told that Grady had a rare form of carcinoma call NUT Protein Carcinoma. “I was in complete and utter shock, shared Dana. The course of action is aggressive chemotherapy. Grady’s treatments are every 21 days and have pushed up the next one with the hopes that he can spend Christmas at home. Dana stressed, “They are taking it one day at a time.”

Mayo is co nsulting with Dr. French of the Dana-Farber Cancer Institute, Boston, Mass., a NUT Protein Carcinoma expert who has been studying this tumor for over 20 years. According to the family’s December 13 post on Caring Bridge, Dr. French is pleased with the aggressive chemo regime and the results Grady is having.

During the interview Kiah asked if she could tell a funny story. “I was watching the boys about two weeks ago. Grady just started pulling out big hunks of hair and he kept pulling it out. It was funny because he just kept pulling it.” Dana explained that Grady was making the most of it. After they cut his hair the following day, Grady got to shave his twin brother’s hair

Wyatt is an active boy that enjoys the outdoors and has never had a video game. Knowing that he would be spending a lot of time in the hospital and feeling well when he is at home, Jimmy got him a video game to entertain him.

Staying home with his mom who telecommutes for her job, Grady got to wrap Christmas presents.

Spring Grove School created an “I spy a monkey and lots of other things!” The book is made up of class pictures and Grady is challenged to find his new friend Monkey, who was given a hug by everyone in school, and all the other items hidden in the pictures. For example, in Kiah’s class picture she has a crayon hidden in her hat that must be found. Monkey accompanies Grady to doctor appointments and stays with him in the hospital and sleeps with him at home.

Immediately upon hearing the news, the community eagerly stepped up to assist Grady and his family as they navigate this difficult path; thus, the beginning of Grady’s Gladiators. Dana explained that she is not even aware of all the fundraisers going on. Therefore, the following list may be incomplete. Jimmy said, “The community is doing a good job already and doing more than I ever thought they would.” Dana chimed in, “How do you thank everyone?” The best way to help the Lundgren/Hammel family is the fundraisers being organized on Grady’s behalf.

Spring Grove, Mabel-Canton, Caledonia, and Houston schools, and the Caledonia daycare showed their support by holding $1 fundraisers for the students and staff. Red’s IGA, Spring Grove, sponsored a “Giving for Grady Meatball Supper,” selling out within two hours. Matt Brown with Estelle’s Eatery & Bar sponsored a fundraiser and asked the community, “Help us support this little warrior!!!” Spring Grove shops donated a percent of their proceeds from their sales on Small Business Saturday.

Top Dog Custom Apparel and Screenprinting in Spring Grove created the Grady’s Gladiators logo. Dana’s sister and Jimmy’s sister helped the folks at Top Dog design the logo with Dana explaining, “At the beginning everyone decided they would wear armor and fight it.” Supporters preordered t-shirts and koozies to demonstrate their support.

Grady has a lot of family and friends in the Kasson-Mantorville area. Angela Lamphere is hosting a Cookie Drive-thru Fundraiser at her home, 61165 265 Ave., Mantorville on Sunday, December 19, from 1-4 p.m. They will be selling Monster Cookies, Chocolate Chip, and Brownies for $10 a dozen.

Grady asked ‘Make a Wish’ for a camper. It might be difficult to get a camper as there are not a lot of campers on the market and Jimmy thinks it will be difficult to find time from his job as a farmer and his construction job to go camping next year, but it was agreed that camping on the farm in a camper would also be fun.

Folks in the community who have gone through a similar situation have shared suggestions. “When you need a quiet place to go to when you are at St. Mary’s go to the library.” And, “Get the nachos at the Canadian Honker.”

During this difficult time the family was also moving. Acknowledging those who helped. “When we were in the hospital for the first stay (11 days), people from my neighborhood in town coordinated moving out the majority of our things from our house in town out here (we had not moved any furniture at that point). I was told that it was several trucks, trailers and people from the community that stepped up to help us get our furniture and most of our belongings out here. Jimmy’s sisters then worked to get everything put away or at least organized by the time we got home from the hospital. I have realized that there really is go much good in the world and am forever thankful for all the support.”

A family friend described this little loving wild boy as a fighter whose gonna kick some butt!