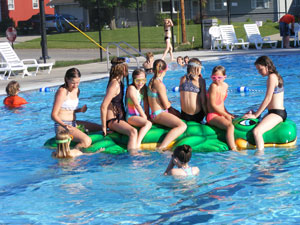 The new Chatfield swimming pool opened on June 7. On an unusually cool June 13 evening, Mayor Russ Smith stood before the new pool for a special dedication to celebrate the culmination of months and months of planning. He credited the Pool Committee (Julie Henry, Alesha Worden, Kari Fredricks, Greg LaPlante, Ed Harris, Kari Njos, Shari Harmann, Michelle Thompson, and Melissa Wolf, pool manager) for doing much of the hard work. They did work with a consultant, Burbach Aquatics, Inc.  As part of the celebration, swimming was free for this evening.

Shari Harmann took me through some of the planning process which included one of the biggest decisions – where the pool should be located. The present location was chosen for ease of access and visibility from Highway 52. The committee looked at other new pools for ideas. They had to decide how big to make it in order to accommodate more people, and what amenities to add and what was affordable. The pool has a water slide, diving board, zip line, zero water entry, and alligator and water spouts for the kids. There is 6,300 square feet of water area. There is also a concession area attached to the bath house and a grassy area inside the fence. There are some large shaded areas covered with canopies with seating that surround parts of the pool.

The new pool has been very busy in its first week. The city has received more revenue at this point than they did all of last year. Much of that has come from individuals or families that buy a membership for the season; the number buying a season membership so far is double last year.

Harmann teaches water aerobics, which are good for mobility. She has taught water aerobics for 20 years and says the ladies, which range in age from 35 to 84, are ecstatic this year. There is a chair lift to help some people that can’t use the ladder to get in and out of the pool. They can also use the zero entry area for easier access.

There was a special referendum on November 7, 2017. Chatfield voters were asked to say “yes” or “no” to the issue of a $4,402,000 bond for the construction of a new swimming pool. Only about 25% of eligible voters voted. The majority, about 55%, voted ‘yes’ authorizing the city council to issue bonds for the pool. Bids were opened in June 2018.

There was some grumbling from a few citizens that was discussed at the city council during this period. A few claimed the referendum was not sufficiently advertised. There had been numerous newspaper articles about the project prior to the referendum. A survey was sent to every address in Chatfield in the summer of 2017. Twenty-eight percent were returned and 57% favored the construction of the pool, about the same percent that voted “yes” in the special election.

The Pool Committee did the majority of the planning for the pool, with input from the school district and the city. In July 2018 the city council authorized bonds up to $4.4 million to be paid off over 20 years.

Demolition of the old pool began late summer of 2018. Construction of the new pool then began and was ongoing over winter. It was completed and ready to open for the 2019 summer swimming season.

There was no grumbling this evening. Mostly young people of all ages were having a great time at the new pool. 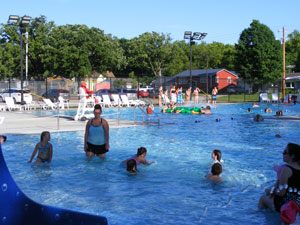 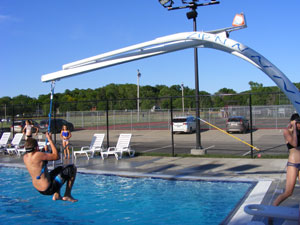 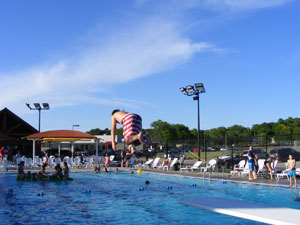 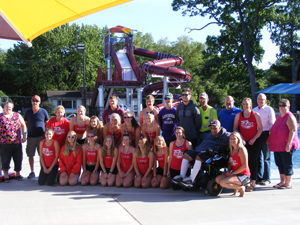