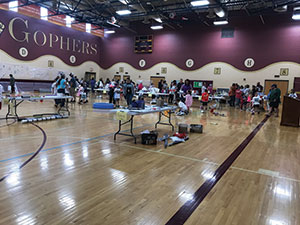 At Chatfield Elementary School, an exciting camp has just wrapped up. Camp Invention was a week-long program running from Monday, June 17 through Friday, June 21. Children came each day from 9 a.m. to 3:30 p.m. The week ended with an “Inventor Showcase” on Friday where the attendees showed off all the projects they had been tirelessly working on throughout the week.

Kaitlin Dunlay, a kindergarten teacher at Chatfield Public Schools, was the director and organizer of the camp. The Superintendent, Ed Harris, brought the idea of Camp Invention to Dunlay three years ago. Dunlay was extremely excited when he mentioned it since she was familiar with the program from her previous job.

Camp Invention is a national summer program which was started in 1990 by local teachers. The main goal of this specific program was to expose children to entrepreneurship and STEM — science, technology, engineering, and mathematics — activities. The various techniques of hands-on learning help disguise typical learning in a fun new way. The program also concentrates on fully engaging children in their activities and working as a team. Dunlay’s hope through this program was “that the program will spark some innovation and new interest for kids.”

Throughout the week, children worked together to create innovative inventions. Inventions repurposed materials such as cardboard, bottles, and cups to be used in completely new ways. The days consisted of the kids rotating around four different classrooms: Farm Tech, DIY Orbot, Deep Sea Mystery, and Innovation Force. In Deep Sea Mystery, they investigated fossils and constellations while making boats, fishing poles, and underwater gear. Kids got the chance to design their very own high tech farm from scratch in the Farm Tech classroom. They were able to use coding to plant crops and stop pollution, and they invented pollinators and devices for animal safety. The DIY Orbot classroom let campers discover frequency, motor, circuit boards, and gears which allowed them to design their own remote control robot. Innovation Force showed the kids other influential inventors, taking their own inventions from “prototype to patent.” Dunlay stated, “At camp they can dream big, realize that they can actually invent something new, and solve real world problems in a fun way.”

Camp Invention was able to bring a large number of people together. There was a total of 61 children attending ranging from kindergarten to sixth grade. Seventh and eighth graders were invited to come and be “leaders in training.” Campers came from Chatfield, St. Charles, Dover-Eyota, and Lanesboro. Dunlay said, “when you ask kids what class was their favorite, they respond with something they liked about each class.” This showed how much each child enjoyed and appreciated their new experiences.

Along with Dunlay, there were several other people who helped her. Nine people worked to keep the camp running smoothly, both instructors and leadership interns who were high school aged students. Parents were incorporated by having their children explain all of their terrific inventions and the hard work they had been putting in.

Concluding the week was the Inventors Showcase. Parents, friends, and community members were invited to come to the Chatfield Elementary School gym to get a better feel for what the week consisted of. A wonderful slideshow was put on, showing pictures of the children working on their projects along with pointing out the primary focus of the week. Once the slideshow was over, those in attendance were invited to walk around looking at how each project worked.

Overall, it was a great week with high attendance. The attending children worked on several exciting projects. They also had the chance to learn how to creatively solve problems with given materials. As long as there is interest and excitement from students, Dunlay plans to continue this program in coming summers. Her dedication to bringing ways to help children learn and step out of the box was a wild success.