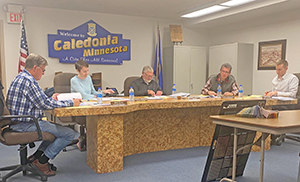 The council approved the land use permit application from Greg Skauge to raise the roof 10 feet on a 30’ x 40’ building at 162 Bissen St. and add a 12’ x 10’ lean-to structure on the north side of the building. In addition, council members authorized the city to pay Houston County $25,241.42 for the city’s share of the water main looping project on E. Washington St. and E. South St.

Mann reviewed the financial reports  – cash and investments, long-term debt, and 2021 budget vs. actual for General Fund, special revenue funds, and enterprise funds, stating that the General Fund is normal. Mann reminded the council that they are now already one month into the fourth quarter and are trying to get everything completed and paid for before the end of the year.

The 2022 budget process continues. The estimated budget for 2022 is based on the 6.5% proposed tax levy approved by the council in September. After expenses and adding back in capital expenditures, the 2022 bottom line is $41,040.00. Mann provided the council with “what if” scenarios to see what the budget will look like if the board decides to decrease the proposed tax levy as it is not finalized.

Public Works/Zoning Director Klug updated the council on the public nuisance properties at 620 S. Marshall Street, 420 W. Caledonia Street, and 418 E. Grove Street. The property owner for 420 W. Caledonia has not contacted the city and did nothing at the property, so  the city cleaned it up. The cost will be assessed back to the property. The property at 418 E. Grove Street has a bed bug infestation problem, and now the neighbors have bed bugs. The city sent in a contractor to clean up the property and assess the cost back to the property owner. The property owner at 620 S. Marshall Street saw that the city was serious when the contractor cleaned up the trash outside the home and the owner asked for a two-week extension to complete the asphalt and garage. The council approved two more weeks for the homeowner to complete the project.

The city assessed liquidated damages of $20,400; $400 per day for 51 days against Ricchio, Inc. on the Caledonia Aquatic Center Pool Gutter Repair Project. Ricchio, Inc. served notice of claim on October 19, 2021, claiming that consideration was not given for lost time due to weather and a delay in receiving a signed contract. The mayor moved to settle the claim and give back 14 days for the cold weather in February for a total of $5,600. The mayor’s recommendation was seconded by Ninneman and approved.

Council members selected the new carpet for the city hall council chambers, which will replace the gray-blue commercial grade carpet currently installed. Director Klug confirmed that the new carpet is a high quality commercial grade carpet from the Floor Guys in Eitzen. Floor Guys is confident that they can get the carpet within the month and have it installed before the end of the year. They will need 2 ½ days for installation. Swann mentioned that he and Director Klug have discussed painting the chamber and refinishing the council chamber table.

The next regular city council meeting is scheduled for Monday, November 8, at 6 p.m. at Caledonia City Hall.