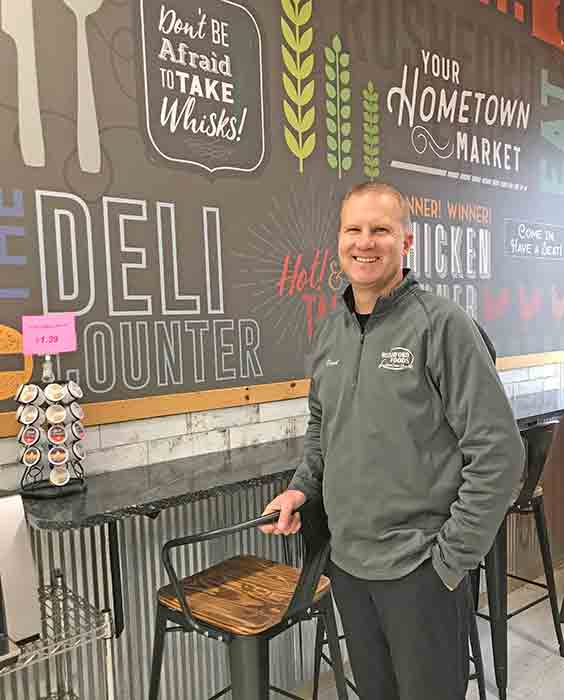 Thanksgiving Day brought the Rushford Fire Department to the Mill Street Mall on a fire call. When they got there the fire had already gone out, but not before causing extensive smoke and soot damage throughout the mall. The State Fire Marshall inspected the mall the next day; the insurance adjuster hired an investigator as well. While the cause of the fire is not certain, it appeared to have started near a treadmill at the fitness center.

When co-owner Brad Hoiness first entered the building using his phone’s flashlight for light, he was amazed at the amount of particles and soot still suspended in the air. The building was not going to be able to be used by the tenants for quite some time — probably months!

Fortunately, there was a suitable building just a block down the street; the building at 212 S. Mill Street was formerly used by Marine Credit Union and was for sale. By Monday after the fire, Jim and Brad Hoiness were looking into purchasing the building; by the following week, tenants were able to begin moving into the building. Brad Hoiness credits local realtor Rodney Darr and attorney Terry Chiglo for the speed at which they arranged for tenants to legally use the building before the closing on the purchase.

The Hoinesses contacted Derek Colbenson who graciously dropped other work and came to measure the building and put the building’s layout on the computer to redesign the space. Brad declared, “Derek has a tremendous job!” Hoiness also thanked Kathy Zacher for obtaining the building’s original plans for them, and Jen Hengel from the Chamber of Commerce who called to offer her personal help with clean up and helped get out the word to the area via email and Facebook.

Brad talked to each of his tenants separately, the tenants met with Derek, and then Brad added a few items he needed as well in order to design the new space. One of Brad’s must haves was a conference room that will be available for all tenants to use; Engelson & Associates will use some of that space for staff workstations during the four months of the year that they are busiest.

Cory Baker will be able to help with the remodel which entails moving some walls and finishing an area that the Credit Union had not redone after the flood of 2007.

Brad Hoiness feels fortunate that he and his father Jim are able to make business decisions such as purchasing the building. They have always been careful not to carry a lot of debt. This business plan proved helpful during the flood and now again.

Plans for the fire-damaged Mill Street Mall are uncertain; cleaning continues at this time. One idea the Hoinesses are toying with is creating downtown housing which would be offered at market rate. Brad said this will take some thought and time; he went on “We see opportunity in Rushford; we need to think about all the empty buildings.”

The new building came furnished with desks, chairs, and some credenzas, a godsend as the tenants set up in their new location. Engelson and Associates, and Micah Hanson State Farm Insurance have already moved into their new location and are doing business there.

Beth Manfull of Engelson’s commented, “I can’t say enough good about the Hoinesses — they bought a building for us!” The Engelson’s suite is located at the back of the building, a feature Manfull appreciates. She likes the quiet and privacy of the area.

All of the clients’ physical files (650 or so) had to be sent out for cleaning. The cleaners have promised to return the files by the first of the year. Essential files are also online and can be accessed as well. The computers have been cleaned and returned. One of the biggest challenges after the fire was getting the payroll completed. Luckily, Brown’s Tire used the same software and allowed Beth to use their computers to do the payroll.

The staff at Engelson’s will change; Ruth Peterson and Kathy Wade will not be returning, but Nancy Rustad and Martha Stensgard will be, along with new hires, Nolan Mueller, an accounting student at WSU, and Courtney Edie who is finishing her accounting degree.

Once the remodel is finished, clients will come in the front door and see the business’s receptionist straight ahead. For now, clients will need to follow the signs. Manfull emphasized, “We are here and ready although our phone message may not be up-to-date, we are here!”

Hanson’s State Farm offices will be located in the front of the building. During the time immediately after the fire, the staff was able to work from home once their laptops were replaced. Last year’s COVID shutdown had prepared them to easily switch over to working virtually again. Corporate State Farm had emergency customer coverage in place to help with calls. Hanson thanked customers for their patience during that time.

When asked what he appreciated most about the new building, Micah replied, “That it was available! Rushford Foods was able to move quickly and local resources helped make things go fast! This is a professional office space, fully equipped, and only a block away from the mall location.”

Data connection has been totally completed by State Farm; only the placement of some walls in the suite needs to be completed, plus signage for the business. The familiar red State Farm band will probably be added soon to the windows.

Hanson wants to ensure that people know where the State Farm office is now located and that they are ready to serve their customers.

New Beginnings will be located in the back right portion of the building. This area was not remodeled after the flood. Laurie Anderson and Lynda Brunsvold want their clients to know that their answering machine is still hooked up. Derek Colbenson is in the process of drawing up plans to be submitted to the state for approval to be eligible for licensing. They hope to expedite the remodeling of the area.

Anderson shared that all new equipment and product needed to be reordered, “It would have cost more to clean our equipment than to purchase new.”

Anderson thanked other hairstylists in the area who have been awesome in offering products and equipment. She added that her main sales rep offered help in cleaning and product as well.

O’Donnell Wealth Management will not be rejoining their old neighbors at the new building. Jeffrey O’Donnell and his brother Jeremy had previously arranged the purchase of the former Woxland Plumbing building just down the street and was set to move in January. His building has a storied past, having been a theater, and gymnastics club before housing Woxland Plumbing. O’Donnell and his assistant Shannon Meier currently are able to meet with clients in the front of the building. A new dividing wall as well as a conference room are in the works for the space.

Computers have already been replaced and new desks, chairs, and other furniture will be arriving soon.

Meier commented, “We are enjoying the sunshine and watching cars go by,” something that they couldn’t do in their previous windowless office. She added they miss seeing their office friends from the mall though!

Former tenant Tim Tekautz of Senior Benefits is still looking for a smaller local office; Brad Hoiness has been trying to help him in his search.

Rushford Foods will be having an office next to New Beginnings in the new building. For the time being, Brad Hoiness is working from his home. His mom, Gayle has retired from doing the accounts payable and Human Resources for the business. Brad and Sarah Brown are sharing the work, with Sarah doing daily bookkeeping and accounts receivable as well.

It appears Rushford has a lot to be thankful for; the Hoinesses were able to purchase and remodel a building to provide space for their tenants to continue to operate in Rushford through the cooperation of many locals in Rushford. Once again an emergency situation brought out the good in a small town!