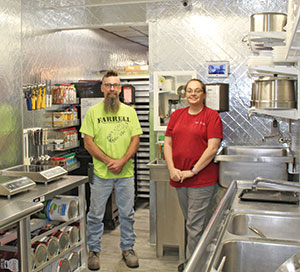 Everyone knows that renovations of any kind can be stressful. So what better time to do them than during 2020, a year marked by intense stress for just about everyone? When Mike and Brenda Eickhoff temporarily closed the The Sweet Stop and Sandwich Shoppe in Preston on July 26, they saw an opportunity to finally get some renovations done that had been on their list for a while. At first, the plan was just to install a walk-in freezer and redo the back wall of the shop, but once they started, they decided to keep going and renovate the whole back of their sandwich shop. Since they were already closed anyway, the opportunity couldn’t be passed up. “It’s been a positive thing to have the time to do it,” Brenda commented.

Just a few days after closing their doors, renovations began. The back entrance of the shop was changed from a simple awning over the back door to being an enclosed walkway with a walk-in freezer and the entry next to it. The sloped ceiling in the back workspace was leveled and the walls redone with a material that will be easier to clean and care for. The shelving was changed to be more efficient as well. The installation of the walk-in freezer allowed Mike and Brenda to eliminate three stand-alone freezers from their work area, which opened up 12-feet of wall space, a considerable gain in an often tight, cramped area. New flooring was also installed in the back. The renovations even spilled out into the area behind the deli counter with new walls. Mike also moved the outlets from the walls to the floor in that area, which allowed the workspace to be moved farther back and added three inches in width. “If you gain an inch here or there, it makes a big difference,” he explained.

Mike, a long-time former employee of Eichkoff Construction did most of the work himself, but did get help from his previous employer with the back wall and roof renovations. Brenda spent much of her time catching up on projects at the couple’s home that they usually didn’t have time to tackle due to their hectic schedules as business owners. She did pop into the sandwich shop now and then to help move things around and do other odd jobs.

The renovations were supposed to be completed in October, but there were manufacturing delays with the walk-in freezer door due to COVID-19 that pushed the project back. The Eichkoffs are done for now, but still have plans to install new flooring behind the deli counter and renovate the seating area at some point. Right now, they have a potential date picked out between Christmas and New Year’s when they can close for a week.

The renovations made The Sweet Stop look amazing, but more importantly, they will help things to run even smoother and more efficiently. “It’s definitely going to make life easier,” Brenda said. Prep work can now be done in the back instead of having to bring the food up front to prepare it.

As the reopening date of November 9 drew closer, Mike and Brenda worked hard to make sure everything was ready to go. The Thursday beforehand was spent restocking groceries and supplies. The soft serve ice cream machine was prepped, and Brenda arrived early Monday morning to bake fresh bread for their famous sandwiches. During the three plus months that they were closed, Mike and Brenda received countless messages and questions from people asking when they planned to come back. “Lots of people are excited to see us reopen,” Brenda said.

When the doors were finally opened again on November 9, the people showed up. “We kept hearing it’s great to have us open again,” Brenda said. “Everyone is super excited.”

The Sweet Shop and Sandwich Shoppe is now open for their regular winter hours of 7:30 a.m. to 6 p.m. from Monday to Friday. Visit www.thesweetstop.net for more information on hours, menu, and online ordering.