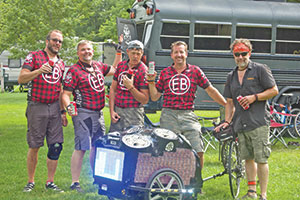 Iowa’s famed RAGBRAI did not happen this year in its usual form, but it did not stop RAGBRAI teams from pulling on their jerseys and shorts and riding the paved bike trails in SE Minnesota.

This past week over 100 bike riders gathered in Fillmore County to ride the trail along the scenic Root River.

The pseud-RAGBRAI earned the name FAKEBRAI for obvious reasons. RAGBRAI teams already had the week off before the pandemic forced organizers to cancel the 48th annual ride across Iowa, so the teams decided to spend the week together riding and having fun enjoying each other’s company and the scenic beauty of SE Minnesota.

2020 high school graduates, Joshua Forbes and Mike Early, from St. Louis, Mo., shared their thoughts. Forbes blurted out that “nature is beautiful,” and Early followed up by stating that “this is my first time in Minnesota, and it is so beautiful. I will be back.”

Forbes and Early, members of Team Matilda, spent 7 1/2 hours on the road to ride in the first FAKEBRAI. Forbes has ridden RAGBRAI six years, not including this year and Early rode RAGBRAI for the first time last year. 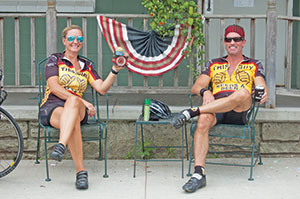 Teams began arriving this past weekend and set up camp at area campgrounds along the Root River.  It was easy to find the FAKEBRAI campsites thanks to the colorful pop-up tents and customized RAGBRAI busses.

Team busses are a sight to see, but more so if you are not familiar with RAGBRAI. Personalized busses accommodate the needs of team members and represent the personalities of each team while providing support to team members during the day.

Team Stupid II offered a tour of their he-bus.  Stepping into the prison-dark grey colored bus with dark-colored windows was like stepping into a locker room. Black curtains blocked out the sunlight, cold air conditioning, and thick mattresses allowed the five men to sleep comfortably during the day.  The back of the bus allows for plenty of space for a cooler stocked with cans of a refreshing beverages, and next to the cooler is a counter for blending liquid meals.

Bikers hit the trails Sunday morning with teams heading in either direction with stops at local businesses. Over the next couple of days, teams headed out in the opposite direction, meeting up with other teams in towns along the Trail. 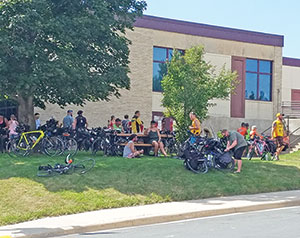 RAGBRAI riders are known for their outgoing personalities, and the riders on FAKEBRAI proved to be just as friendly. Patrick Clem and Julie Scebold were enjoying the beautiful weather in Peterson and graciously answered questions and posed for photos. The couple from Nevada, Iowa, are members of Team Kamikaze and this is the first time they have ridden the Root River Bike Trail. (P.S. The couple is engaged and plan on getting married next year. Congratulations!) Maybe they will honeymoon in southeast Minnesota.

The rest of Team Kamikaze was found enjoying lunch at Stumpy’s in Rushford. Team members sitting outside included former Mabel resident Nathan Manning, now from Des Moines, and his cohorts Joe Wiese and Kala Anderson, also from Des Moines.  Team Kamikaze’s founder has been riding in RAGBRAI for 20 years. Manning and Wiese were not sure exactly how many members the team has but estimate it is between 30-50 members. At that moment, the team walked out of Stumpy’s, and it looked like almost all the members are riding on the first FAKEBRAI.

FAKEBRAI riders were not the only bikers on the trail. Jim and Carla Janssen of Waverly, Iowa, stopped in front of Shawnee’s Bar & Grill in downtown Rushford offered advice on where to find the FAKEBRAI teams.  The Janssens shared that they had never ridden RAGBRAI, but one would assume they had ridden RAGBRAI and were part of the pseud-RAGBRAI because they were as friendly and as helpful as the FAKEBRAI teams.

According the the RAGBRAI website, ragbrai.com, it all started when a few friends got together for a casual bike ride across Iowa in 1973 and each year has grown.  They now limit the number of riders to 8,500.  The next ride, RAGBRAI  XLVIII, is scheduled for July 25-31, 2021. 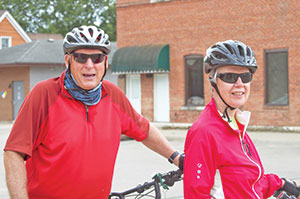