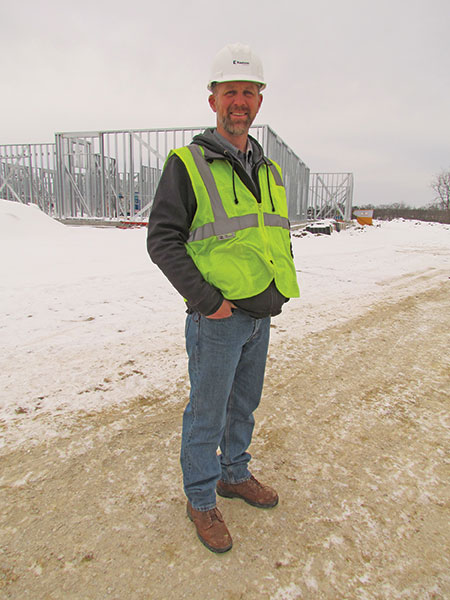 It has been four months since construction started on Preston’s new veterans home project, and it is already 10% completed.

Project Executive Derek O’Connor, Knutson Construction, a 110-year-old company out of Rochester, took time to answer questions and share aerial photos of the work completed at the construction site over the past four months.

But first, O’Connor mentioned that he is a long-time resident of Preston. So it is nice to be working on a project of this size and the economic impact expected from the project in his hometown. The same town connection became even more evident while walking around the construction site. While taking photos of the site, he pointed out one of the workers, Jodi Olson. Olson and O’Connor went to high school together. In addition, as a veteran, he could be building his future home.

What work has been completed so far? “We are in the early stage of the project. We started construction in September, and we have all the foundations poured, 20% of the slab on grade placed, underground MEP (mechanical, electrical, and plumbing engineering) in two households, and are working on the exterior framing. In addition, much of the site grading is completed. Overall, the project is about 10% complete,” explained O’Connor.

Is the project ahead of schedule? “With the mild fall weather, it has allowed us to get further ahead on the foundations and the underground work. So, we are still tracking on schedule. The project is scheduled to be completed in March 2023.”

Every day it seems as one hears stories about construction projects experiencing higher prices on material such as lumber and pipe and delays in obtaining material. So, it only seemed natural to ask if this project is experiencing higher costs and delays. O’Connor explained, “Right now, we are looking out to the end of the project and making sure that we have everything ordered right now in anticipation of possible delays. We do have a few items that are farther out than anticipated, but we have been able to make adjustments in the schedule to account for them.”

The total budget for the veterans home project is $28.8 million, and it is still on budget.

When asked if the subcontractors run into any delays, O’Connor noted, “We have had a few material delays but have been able to get alternate pipe material that allowed us to keep moving without delays. However, at times we need to dig in deeper for alternate materials.”

Initially, a generator was going to take over 45 months to be delivered, but it has now been ordered. The generator is not needed until the end of the project, so O’Connor believes it should arrive in time

COVID has not impacted the veterans home project as much as expected. “We have had a few workers out for COVID, but for the most part, no issues,” said O’Connor.

According to mn.gov/mdva/homes/futurehomes/, the general contractor will strive to hire a significant percentage from the local communities. O’Connor mentioned that finding employees to hire for this project has not been a problem.

The final question of the day. What would you like Fillmore County Journal readers to know? “We send updates of photos and newsletters to Gabby Kinneberg, Preston Tourism Director, and she keeps them posted on the Veterans website, prestonmn.org/veterans-home/. Also, make sure to keep up by viewing the webcam, app.oxblue.com/open/Knutson/prestonmnveteranshome, to monitor the construction progress.” Finally, a Facebook page, @PrestonMNVetsHome, is dedicated to supporting the Preston Veterans Home.

Fillmore County Journal readers interested in working at the new facility or potential residents wanting to learn more about the new veterans home should watch for information at the beginning of 2023.

After interviewing O’Connor and hearing his answers and comments, it immediately appeared that the project is uneventful and moving forward as planned. O’Connor replied, “That is the way we like it.”