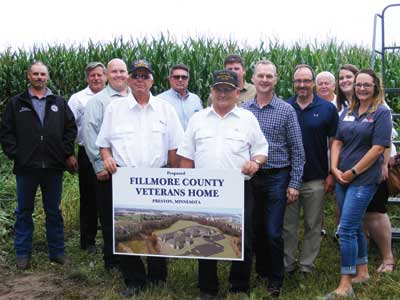 Thanks to Dave Goodmanson, Fountain, who called Congressman Tim Walz’s office last week, three of the congressman’s staff visited Fillmore County on August 15 for most of the day. Goodmanson called about the city’s wastewater facility discussed in another article in this paper.

About three months ago Cathy Enerson, who is the EDA director for both Preston and Spring Valley, brought it to Walz’s attention that there is a need for a veterans home in southeast Minnesota. The need was demonstrated statistically in a study of the veteran population in 15 southeast Minnesota counties, the catchment area to be served by the proposed home. There are enough veterans in the area to keep a 72 bed facility full until 2040.  Shawn Schloesser, Veterans and Military Affairs Representative for Walz, agreed there certainly is a need in this area. We are here to understand the vision of those that have worked hard to bring a veterans home to Fillmore County. Rural areas are very supportive of the military. Veterans Service Officer Jason Marquardt noted the veteran population in this area is aging, many are 40 to 100 years old.

It was decided to incorporate with the visit to Fountain a trip to Spring Valley and Preston to look at the sites proposed by each of the cities for a state veterans home. The cities each have a committee which has been meeting for nearly two years. Both are being proactive in their efforts to bring a veterans home to their city. Each community will donate land and infrastructure if their location is chosen. The facility will be operated by the state if built. Commissioner Mitch Lentz said the need more than justifies a state veterans home in the area.

Both settings are unique. The lengthy process to actually get a home built and occupied will likely take years. Preston City Administrator Joe Hoffman noted there is no veterans home in southeast Minnesota. He plugged the Preston location calling it a great, scenic, idyllic location close to a major highway. The closest existing veterans homes are in Minneapolis and Luverne. Having a veterans home in the area at a reasonable driving distance is important to allow veterans to stay close to home and family. Being close to family creates a feeling of well being.

Ron Scheevel, co-chair of the Preston committee and a Vietnam era vet, said the veterans community is overwhelmingly in support of a home in the area. It is a community effort; support is needed from both the veterans and non-veterans to make it a reality.

It is estimated to cost $30 million to build a 72-bed home. The next step is to get the state match of about $10 million included in next year’s bonding bill for a Fillmore County home. Scheevel stated state funding is essential. There are three locations in the state including, Fillmore County, that are seeking funding from the state for a veterans home. Schloesser stated that Fillmore County is doing a good job advocating at the state level by demonstrating the unmet need. It is a two- to three-hour hour drive now to an existing home.

The Preston location is located near the city’s water tower on land now owned by Bob Doherty. The Spring Valley location is on Tracy Road W.