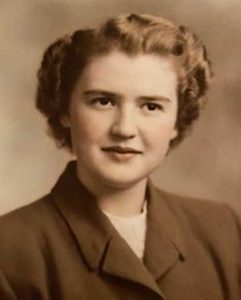 She was the third oldest of five children. Her family moved to a 160-acre farm in Odebolt, Iowa, in March 1942. There they raised hogs, beef cows, feeder cattle, and chickens and grew corn, soybeans, alfalfa, and oats, and they had a large garden that was her father’s pride and joy, even though at the time it was considered “women’s work” that fed the family.

Lois met Darrel Eugene Ray at a church camp in 1950. Darrel said he knew who she was before the church camp. He was going to be a senior in Ida Grove, Iowa, and Lois was going to be a junior. He knew her as one of the Odebolt girls. They were married on February 5, 1956, in Odebolt, Iowa.

Lois was active in basketball and was named homecoming queen of the class of 1951. She started school at Iowa Methodist School of Nursing at Drake University in the fall of 1951. She shared interesting history of the polio outbreak at the time.

Her nursing career took her from working in St. Louis, Mo., before graduating in 1954, to being hired at Rochester Methodist Hospital later in 1954 where she worked in surgery. Due to the winter weather and the drive, she started working for a local physician in Preston. She also worked at the Spring Valley Hospital, and Fillmore County Public Health.

Darrel and Lois moved into the main house at Sunnyside Farm in Preston, Minn., after their honeymoon. This is where they raised their five girls, each born about a year apart, and where they lived throughout their lives. They were members of the Preston Saddle Club. They joined the United Methodist Church in Preston, Minn. Lois and Darrel Ray had five daughters: Rita Ray-Mihm (Larry), Cheryl Dornink (Greg), Laurie Fritsch (Mike), Connie Arentson (Terry), and Kathryn Burkgren.

Lois was involved in many community activities: Saddle Club, United Methodist Church activities and 4-H. She and Darrel served as 4-H leaders of Carimona Cruisers 4-H Club. She directed 4-H plays and wrote skits skits/medleys for 4-H productions. Lois and Darrel were honored for the work in county level 4-H. Lois also taught Sunday School through the years when her daughters were growing up.

Lois opened a bed and breakfast called Sunnyside Cottage and ran it for about 30 years. It is here where her grandchildren’s cleaning skills were sharpened! In the summers and over Christmas break when one daughter came home to visit, she and that daughter would have nine of the 13 grandchildren who were five and under stay over. It was a loving craziness with diapers, meals, toys everywhere, children who had hay in their pantlegs and pockets and didn’t empty them… remember, she loved a clean house! She loved playing bingo and card games with her grandchildren and gave out fun prizes. The memories she helped to make around that kitchen table for her children and grandchildren will live on in stories. She will be remembered as an energetic person, the most amazing cook and baker, and a wife, mom, grandmother, and community volunteer who showed her love through food and volunteering.

She is survived by her husband, daughters, sons-in-law, 13 grandchildren, and 13 great-grandchildren.

In lieu of flowers, memorials can be designated to the Preston Public Library, St. Croix Hospice, or Fillmore County 4-H Program.

A special thank you to Gundersen Harmony Care Center for the compassionate care of our mother and to Jenny Hovey, her St. Croix hospice nurse.