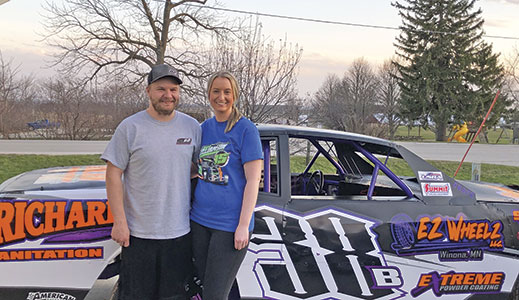 When I interviewed Brooke Schwebach of Fountain, Minn., I found it serendipitous that I recently watched Ford vs. Ferrari and visited the NASCAR museum in Charlotte, N.C. Since these two experiences equal the sum of my car racing knowledge, I had a lot of basic questions for Brooke.
Brooke’s car is a Monte Carlo handed down to her by her husband Nick, who is also a racer. In fact, Nick and Brooke met on the track. Brooke’s brother was a racer and she grew up watching him. The track is where she first caught Nick’s eye.
The Monte Carlo’s body style is a 1988, but the chassis was built in 2010 by Nick and a few friends. The car’s body is about all that resembles a normal car. There is no windshield.
Sometimes drivers get mud on their face shield and have to wipe it off while they’re driving. There are no headlights (just faux plastic sticker-like headlights), so the car is trailered to and from the track. The doors are welded shut. Before Brooke hopped through the window to get in the driver’s seat, she removed the steering wheel which freaked me out. I asked if a removable steering wheel was safe? She showed me how it was securely locked back in, however, she said, they have been known to come off while racing. The chassis was built from scratch. The safety bars and rims are bright purple, which, along with orange, is Brooke’s favorite color. The number 38 was her husband’s number so she kept it but added a B for Brooke — 38B!
Brooke will be racing USRA (United States Racing Association) Hobby Stock on a dirt track. The mission of the USRA is “fostering increased driver participation of competitors through cost-effective rules that do not hinder creativity, increased fan attendance at member tracks and increased sponsorship for each USRA-sanctioned member track.” They strive to maintain guidelines to make racing affordable and fun for all racers, without sacrificing exciting and competitive racing action for fans. The dirt track is misted with water and drivers do slow laps to pack down the dirt. The first race is a Heat Race of eight laps followed by the Feature Race of 20 laps. Drivers reach speeds up to 78 MPH.
Brooke is psyched to put on her fireproof suit, gloves, boots and helmet and get into the five point harness for her first race at Mississippi Thunder Speedway in Fountain City, Wis. The season was set to begin this Friday, but has been postponed. This is her dream and she’s excited to learn and improve. She’s a little nervous because she’s never driven the track with other racers. Nick is a great mentor having 15 years of experience. They’ve also rented track time at Deer Creek Speedway for practice. I can’t wait to follow Brooke’s progress achieving her dream. Thumbs up Brooke! 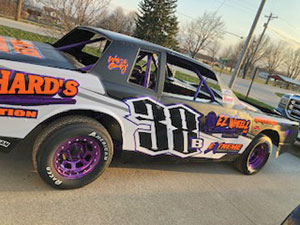