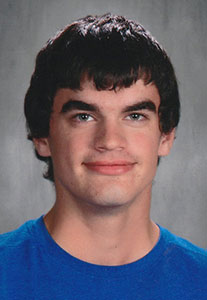 Visitation will be held from 10 a.m. to 1 p.m. with funeral service at 1 p.m., Sunday, September 12, 2021, at Serenity Hills in Preston, Minn.  Burial will be at the Lanesboro Cemetery.  Hindt-Hudek Funeral Home Preston is assisting the family.

Zachary Hans Torgerson was born February 27, 2002, son of Michael and Raquel (Schultz) Torgerson in Rochester, Minn.  Those that know Zach know he did not enjoy sitting idle for very long.  At a young age he began working for Bruening Construction after school and during the summer.  His hard work ethic continued when he began working with Chris Nelson Construction at the age of 15, where he was currently employed.  Zach loved being outside building houses, woodworking, welding, and repairing vehicles and tractors. Zach had a passion for being out in the field doing custom fieldwork for friends and neighbors. He had a willingness to help people.  His classmates knew that if they needed a vehicle repaired, Zach was the one to ask.  Zach was a 2020 graduate from Lanesboro High School. When Zach was not working he enjoyed trapshooting, hunting, fishing, snowmobiling, 4-wheeling, and riding motorcycles.  He also liked to go boating and sit around a campfire on his land with friends.  Most recently Zach enjoyed training and hanging out with his new black lab companion, Scout.