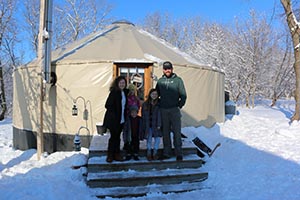 After buying a piece of property outside of Wykoff, the Ramaker family – Damon, Kylie, Ruby, Lucy and Walter, had the difficult decision of what to do for a house. They decided that the existing home on the property wasn’t salvageable.  After weighing their options, they ended up buying a yurt.

A yurt, also called a ger, is a round, portable tent that is used by the nomadic people of the central Asian steppes.  They became popular in the United States after the 1960s and have been used extensively for various types of permanent homes as well as lodging for campers in many of the state parks.  The latter is what planted the seed for a possible home for the Ramakers.

“Kylie and I had actually stayed in a yurt once upon a time before we had kids,” explains Damon, “so it had a bit of an appeal to it.  It just kind of worked and became kind of an adventure.”

They purchased the yurt used, and at a discounted price, from Missouri, knowing that they would have to replace all the canvas and the outside layers.  They sewed all the canvas for the inside and glued all the tarp together for the outside.  This was much more cost effective for them than buying a brand new yurt.  All their hard work led to a beautiful, round home.

The 30-foot diameter, 700-square-foot yurt has an entry, living room, full kitchen, bathroom, children’s room, and a loft bedroom that doubles as a play area for the children during the day.  There is also a pantry, plenty of storage, and a stacked washer and dryer.

After spending the last three and a half years living in the yurt they have come to learn the ups and downs or yurt living.  Since it doesn’t breath like a normal house, it can have mold issues so they have to go through once a year and bleach any moldy spots.  During the really hot parts of the summer it can get very warm in there; almost like a greenhouse effect.  They tried air conditioning units but didn’t like the outcome.  They realized that they would need to go back to the days before air conditioning for the solution.  Opening the windows at night let the cool air in while keeping the windows shut and shaded during the day helped the house stay cool, even on the hottest days.

“We have different tolerance levels for comfort, but we’ve made it work,” says Kylie.

Their primary heat source is wood, but they do have a back-up heat unit that runs off of electricity.  They would prefer to have had an extra layer or two of insulation for the winter for some of the coldest days, but the wood stove keeps the home very cozy for an average winter.

“We didn’t really know what we were getting ourselves into,” says Damon with a smile, “so we didn’t know how it was going to handle in the winter; what it was going to be like in the summer.  We didn’t know if we were all going to fit in here or not.  We had an idea and just kind of went with it and prayed that things would work out.”

They really appreciate the modest size of the structure.  It doesn’t take very long to clean, but can still hold plenty of family and friends as well as their dogs.  The children seem to enjoy it as much as their parents.

“The first time the kids played hide and go seek we were like, oh, that’s going to be a pretty easy game,” says Kylie.  “It was really interesting because they would find the tiny corners that you wouldn’t think about.”

Though the yurt was put up as a temporary dwelling, they have not made a decision when to replace it or what to replace it with.  They do know that they don’t want something that’s too mainstream.  As for the fate of the yurt, they haven’t decided yet, but it is very evident that the whole family has become very attached to it.

“I really enjoy the small space of it,” explains Damon.  “It’s tight and certain days it feels smaller than others, but I think it’s a great way to raise a family because you’re forced to get along and forced to work through some of the problems together.  Nobody gets to retreat to their own room and not talk to anybody.  It forces you into being together. I think we’ve grown as a family though the process.”