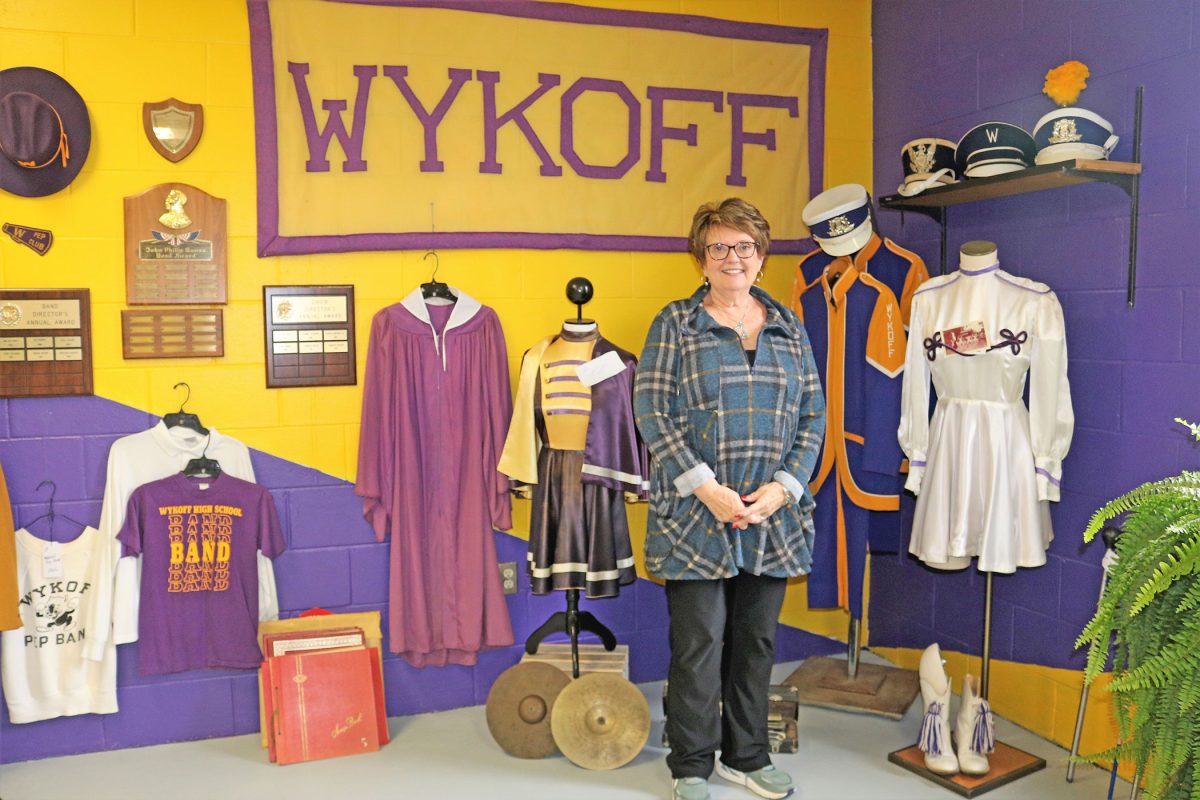 What’s old is new again. Such as the case with the newly established Wykoff School Museum, where the items that were located in the former Ed’s Museum on Main Street in Wykoff, Minn., were moved into two rooms of the former school building, now known as Wykoff Commons, to create the Wykoff School Museum that is run by the Wykoff Historical Society.

The idea for the move came from Mary Sackett, who saw an opportunity. “We had the museum downtown, in Ed’s Museum, and it was small,” notes Sackett. “This became available and I thought we should create a school museum.”

It didn’t take long for momentum on the project to grow. “The Historical Society thought it was great, they let me take the lead, and we decided we were going to do it,” states Sackett, who was named chairperson for the project.

Two rooms in the Wykoff Commons building were cleaned up and painted in purple and gold. “As for the painting of the purple and gold in different stripes, I had a young artist give me the idea of doing them diagonal and half in the next room. The painting was done by Diane Ramaker and myself,” explains Sackett.

The next step was to move all of the items from Ed’s Museum to the new space. Although not a distant move, you can imagine it was no small feat gathering, packing, loading, moving, and unloading the various items until they reached their destination. That work was done by Dean Ramaker, Rich Ramaker, Steve and Diane Ramaker and Sackett.

After all the school memorabilia had been brought in, it was time for organizing. A daunting task, but those involved took it day by day. “We just put everything in the middle of the floor and started dividing to see where we could hang things,” Sackett remarks.

The Wykoff School Museum is divided into two rooms. One is an educational room with a desk, library books, information on former school staff and yearbooks. The second room is an athletic room with old sports uniforms and many other items on display.

But the group was not done yet, not by any means, as there was quite a bit of research to do.  Sackett describes this process, saying, “We spent a great deal of time going through yearbooks to see when people wore these uniforms, in order to tag them with their description.” She added, “I went through all the yearbooks so that we would know from the beginning of the school, until it closed, all of the superintendents, principals, school board members, secretaries, cooks, bus drivers and custodians. They are all framed with their years on them and named.” There is also an area where all of the homecoming kings and queens are listed and some of the clothes they wore are on display.

Sackett’s sister, Roxanne Sabatke, was in charge of the renovation of the memory boards that were used for the 100-year reunion, which was quite a task.

Although there was much research done, the Wykoff Historical Society understands that there may be incorrect or incomplete information. Project workers ask that if people notice any mistakes or know when any of the uniforms were worn, to let them know so they can be corrected.

The items are now on permanent display in the Wykoff Commons building. The hours of operation have yet to be determined. It will likely be open by appointment, until a final plan is made.

For the time being, if anyone would like to set up an appointment to visit the Wykoff School Museum, they can contact Sackett at (507) 696-1766 or Shirl Boelter, the Secretary/Treasurer of the Wykoff Historical Society, at (507) 951-5734.

The Wykoff School Museum was open in time for Wykoff Fall Fest and as people toured the rooms, there were many positive comments, such as, “It looks very nice,” and, “I wore that uniform,” as they reminisced.

If you have any of your school memorabilia, the Wykoff Historical Society would be happy to take it off your hands and add it to the collection.

“We have had a lot of interest. Many have stated they want to donate things. If you are interested and would like to donate school memorabilia, please contact me or Shirl and we will make arrangements to have it dropped off or picked up,” states Sackett.

The funds for this project came from donations but more support is needed. “There are many things we want to do yet,” Sackett remarks.

The Wykoff Historical Society is appreciative of those who worked on the museum project, including Mary Sackett, Diane Ramaker, Deb Moeller, Shirl Boelter, and Roxanne Sabatke; plus those who offered their carpentry skills: Rick Erdman, Phil Grabau, Rick Whitney, Dean Ramaker and Scott Finke. Appreciation also goes out to many others, too numerous to mention.

Be sure to visit the Wykoff School Museum soon, and often, as additional memorabilia is donated and displayed.