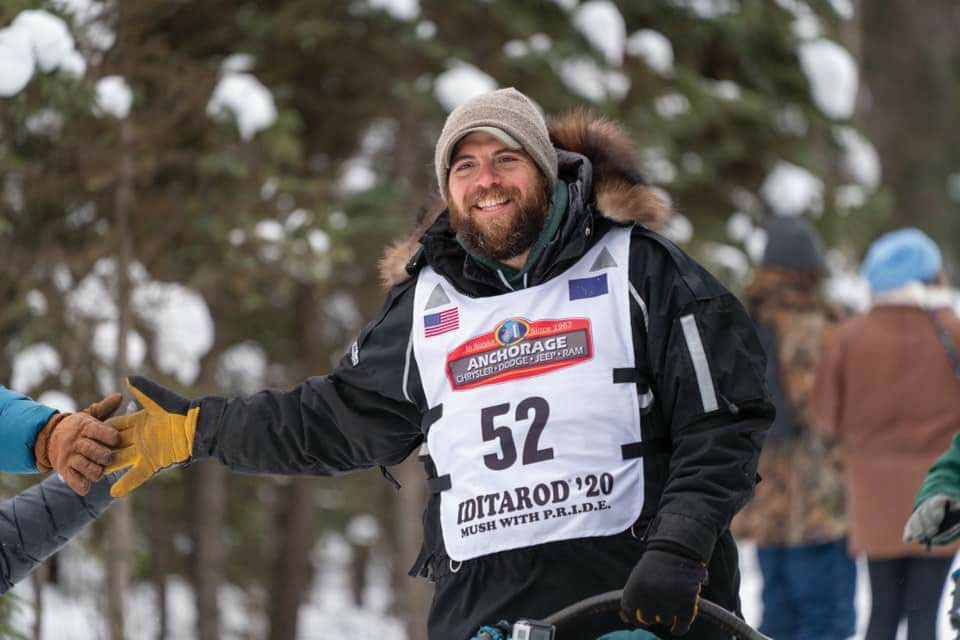 When Damon Ramaker was a child, his family took a trip to Alaska.  While they were there they took a tour of the Iditarod.  His parents brought home a map of the route and it has hung in their house since then.  What he didn’t know then was that that map would take on a whole new significance when he was an adult.

“It didn’t have a lot of meaning except something cool to look at.  Now it has a whole different meaning.” said Ramaker as he prepared for the 2020 Iditarod.

Ramaker is quick to point out that dogsledding is not a solo effort and says that most people start out with some sort of mentor.  He was very fortunate to have another musher close by, Cindy Gallea, an experienced musher and Iditarod racer from rural Wykoff.

“I sought out Cindy because I knew she did it and I was interested,” stated Ramaker.  “I just kind of wanted to learn more about mushing on a bigger level than I was doing at that time.  I had an opportunity to help her in 2016.  I handled for her when she went to Iditarod.  I had this mentor available, and she was very willing to help me and be my guide through this opportunity.”

“Without her I don’t know if this all is possible.” commented Ramaker’s wife Kylie. 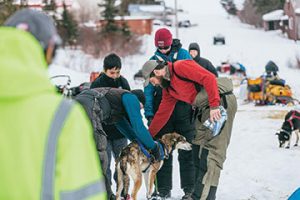 To prepare, Damon Ramaker trains with the dogs 4 days a week.  His mentor plus two handlers work the dogs as well.   During the races he also has people to keep the lines together, help with the gear, and scout the trails.  Among many other things, Kylie takes care of the website and social media.  Their three children do what they can to help as well.  Friends, family, and neighbors also help with various chores around the property when needed.

“It takes a lot of time to do this,” stated Ramaker.  “It’s not just training, it’s also planning. There’s a fair amount of organizational stuff that happens.  It’s not just me going out and training for a big race.”

“I think if anybody can do it. Damon can do it,” said Kylie before the race.  “I think he has the right skill sets to make decisions when sleep deprived.  His perseverance and stamina… that’s what he’s made of.  What it takes, he has.” 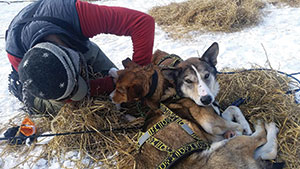 The 2020 Iditarod began March 7 in Anchorage, Alaska and ended in Nome, Alaska.  Damon Ramaker and his team of 12 Alaskan huskies finished in 13 days and 20 hours.  It took longer than anticipated because of a large storm that moved in when he was in the last 150 miles of the race.   He and a handful of other mushers got stuck in one spot for around 30 hours.  Aside from the storm, temperatures started out in the mid 20s, stayed in the teens and got to the thirties toward the coast.  They had one night of -40 °  One of the big concerns, due to the large amount of snow on the ground, was moose.  They tend to walk more on the mushing trails when the snow is deep.  He saw plenty of moose but luckily none on the trail.

“It was pretty incredible.  It’s probably the hardest things I’ve done in my life to this point,” says Ramaker.  “It was pretty amazing just to be a part of it and to be able to finish it is icing on the cake. So many things are out of your control on whether you are able to finish. There were times when you’re on top of the world and there’s other times when you’re just struggling to get through.  Lots of mental fatigue. You struggle and get through that and then life is good again. I got to see a lot of different parts of Alaska; met really cool people from the volunteers, to the natives, to the other mushers.  For me I feel like it was a blessing to be able to run it.  Being able to finish was an even bigger blessing.”

As far as running the race in the future he’s uncertain.  He would like to but whether that happens again, time will tell.  He’s going to continue to have the dogs ready for that and if life circumstances allow, he will be there. 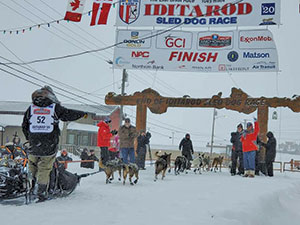