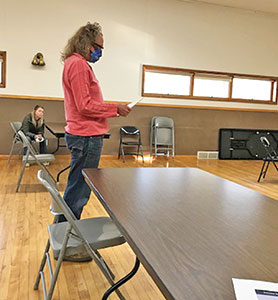 On May 11, the Wykoff City Council held a public hearing regarding the proposed assessments related to the ongoing County Highway 5 project, which includes street and infrastructure upgrades in Wykoff.  The public hearing ran from 6:30-6:45 p.m.  Following the public hearing, the council held a regular meeting at 7 p.m.  Council members in attendance included Lyle Morey, Richard Gleason, Mayor Al Williams, and Mary Sackett.  Mary Tjepkes was absent.  City Clerk Becky Schmidt and Deputy Clerk Luann Hare were also in attendance.  Masks were made available for all in attendance, and chairs were positioned to encourage social distancing practices.

During the public hearing, only one additional citizen (Rocky Vreeman) was in attendance.  Daren Sikkink, from the engineering and planning firm of WHKS, spoke regarding the project and planned assessments.  Sikkink shared information on the general scope of the project, which involves Line Street, Fillmore Street, and Gold Street.  His handout showed that the estimated total city cost is $588,000 ($192,228 for Line Street, $120,930 for Fillmore Street, and $244,841 for Gold Street).

Sikkink stated that, as usual, the city is assessing roughly 20% of the costs to those property owners on the applicable portions of those streets.  Citizens can prepay by November 15, or assessments will appear on 2021 taxes with an interest rate of less than 3%.  He also mentioned that senior citizens and those with a disability may qualify for a deferral, and should contact City Hall if interested in details.  Sikkink added that the street construction is expected to be completed around July 24.

Rocky Vreeman asked, “What is the deal with all of the water shut-offs?”  Sikkink said those were included in the project so that anytime the city needs to shut water off to handle a specific future problem area, it will be possible to shut off only a small area, rather than the entire city.  The public hearing ended at 6:45.  Later, during the regular council meeting, the council formally adopted the assessments for the County 5 project as proposed.

Eva Barr, president of the Wykoff Commons group, addressed the council with a proposal.  The group aims to find ways to repurpose the former school building in Wykoff for a variety of community uses.  She read from a letter outlining the idea, which stated in part, “Our hope… is that the city would relocate its offices to the school to become an anchor tenant.  This would provide the city not only with more space… but also for council meetings…”  She went on to explain that the city would occupy the space rent-free for a to-be-determined period (up to two years), and that Wykoff Commons would ask for a tax abatement on the property.  She stated that if the city chooses to occupy the space, new carpeting and painting would be done to the office area.  Other suggestions were listed as well, including that a formal contract would be signed.  She described the overall proposal as a “win-win” for the city and residents of Wykoff.  Council members voiced the need to find out more about insurance and liability concerns.  No formal action was taken on the issue at this time.

The council discussed the possibility of revoking the Conditional Use Permit (CUP) for CSC.  Becky Schmidt informed the council that CSC erected a wall/fence on the north side of the property, but did not acquire a permit, and the structure does not meet the applicable ordinance.  The council voted to revoke the CUP and inform the property owner that the wall/fence will need to be removed.

Next, the council considered the property owned by Mike Shaw, which has vehicles parked outside the fence.  There was discussion on whether to send a letter, or have law enforcement contact Mr. Shaw.  Richard Gleason said that since this is not a new problem at this address, the owner is well aware of the expectation.  He added that since the city pays for law enforcement to handle violations, he suggested asking the sheriff’s department to contact Mr. Shaw on the issue.  The council voted unanimously to do so.

Regarding the Wykoff Jail Haus Bed & Breakfast, Eva Barr spoke regarding a small area of sidewalk just outside of the building that needs to be replaced to prevent water from continuing to run back under the building.  She said she’d received a quote of $6,000 for the work, but wondered if John Baker could do it less expensively for the city.  The council agreed to check into the issue and see what the best option is.  The council’s next regular meeting will be Monday, June 8, at 7 p.m.  The public, as always, is welcome