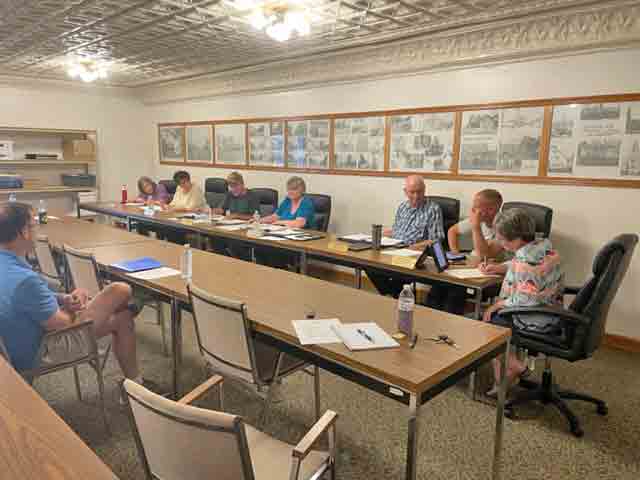 One of the main topics was traffic speed in and around Wykoff.  Mayor Breckenridge told of his efforts to get more 30mph signs installed within city limits.  He said, “I am currently in contact with the Minnesota DOT and Fillmore Highway Division about adding 30mph speed signs throughout our town… Speeding is a big problem in our town!”  Breckenridge added, “Just an FYI, I am looking also into ‘jake brake’ coming into town, because some of those semis come into town and use their jake brake, and it is very loud.”

The council also discussed the possibility of getting a decrease in the highway speed allowed just outside city limits.  Currently, traffic on Highway 80 has a limit of 60mph as it approaches Wykoff.  Becky Schmidt said the state has strict guidelines about this, and she stated, “You gotta have so many accidents before they’ll do anything.  It’s tough to get them to change speed limits anywhere.”

Schmidt updated the council on efforts to get a lighted “speed read-out” sign to show drivers their speed as they enter Wykoff.  Schmidt said she received an email from Brenda Pohlman (Fillmore County Public Health) explaining that while the total cost of sich signs is $2,500 to $4,000, there is currently a program available which would pay the majority, leaving Wykoff to pay only $1000.

Breckenridge said he prefers the solar powered speed sign, since it appears to be low maintenance and easily transportable.  After discussion, the council voted to approve ordering that type of read-out sign.  Schmidt noted, “The State will still dictate where we can put it.”

Another topic that generated significant conversation was whether or not to allow candy to be thrown from parade floats.  There are some cities that have outlawed this practice, to prevent kids from being run over as they chase candy.  Kaleb Himli informed the council that he had researched parade accidents nationwide over the past many years, and the incidents tend to be caused by other factors (driver error, vehicular mishaps, etc) rather than anything to do with candy.  He stated his opinion that there is risk associated with everything, and he feels Wykoff should not stop candy from being thrown.  After discussion, the council did not take any formal action on the matter.

Schmidt informed the council that Local Governmental Aid (LGA) is funding tht the State provides to cities to help them operate.  She said last year, Minnesota gave Wykoff roughly $260,000 in LGA, and this year, it went up by only $1,000, despite inflation, and despite Minnesota’s multi-billion dollar budget surplus.  She asked the council to consider approving a letter asking the State to pass a bonding bill to allocate more funds to LGA, to help cities such as Wykoff.  Mary Sackett read aloud such a letter recently approved in Rushford, and the council voted to approve such a letter being drafted to be sent by the City of Wykoff.

Schmidt shared information she collected following a citizen who asked to know the identity of who had filed a complaint with the city.  Schmidt provided copies of Minnesota statutes that indicate confidentiality of reporting is required, so the city cannot divulge who has lodged a complaint.  Council members also stated that the city of Wykoff does not “go out looking” for violations of junk or nuisance ordinances (as some cities do) but instead takes action when citizens bring up concerns to the council.

Wykoff’s next city council meeting will be Monday, September 12 at 7 p.m., at city hall.