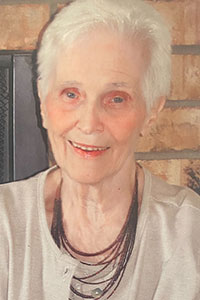 Freddie was born on December 31, 1934, in Philadelphia, Penn., to Elizabeth Ostendorf Klinedinst and William Klinedinst along with her twin sister Nancy.

She graduated from York Catholic High School in 1952, and she later met the love of her life, Norvel Tranaas from Hesper, Iowa, when he was stationed in Pennsylvania during the Korean War.  They were married on May 29, 1954, in Pennsylvania and made their home in Hesper, Iowa, until they eventually moved three miles to Mabel, Minn., where they spent their married life until Norvel passed away from cancer in January of 1992.  Freddie moved to Fountain Hills, Ariz., in 1993 to live near their three children.

Freddie was a wonderful mother, wife, friend, grandma, great-grandma and great-great-grandma.  She had a heart of gold and was always there for whomever needed her. She loved to watch movies, go shopping, play cards, visit, and spend time with her family.  She had a ready smile and she was a people person, and a compassionate person so she loved her job, first at Green Lea Manor Nursing home and her longtime job at Herzog Drugs in Mabel. When she moved to Arizona she went to work for Collection Service Bureau in Scottsdale as part of the administrative staff, where she made many friends of all ages.

In June of 2012, Freddie suffered a stroke and moved to Fountain View Assisted Living in Fountain Hills, where she was a resident until her death.

Freddie was strong in her Catholic faith and she was ready to go home and be with her loved ones who were waiting with open arms for her.

We would like to thank Anuca and  Fountain View Assisted Living for all of their years of care in making our mom happy and content, with the feeling of being at home in her environment.

A memorial service will be held on January 12, 2021, at Messinger Mortuary in Fountain Hills at 2 p.m.  In lieu of flowers the family has suggested donations to the American Cancer Society.

There will be a memorial service come springtime in Mabel, Minn., when Freddie is brought  back home to be laid to rest  with her husband Norvel Tranaas.