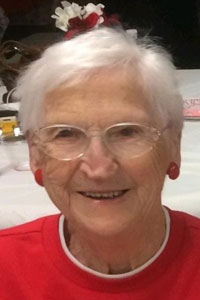 Winnie was born on May 9, 1922, in Caledonia, Minn., the third daughter and tenth child of Peter and Barbara Klug.  She married Norman Wilsey in 1943, they owned and operated a family farm in Houston County and were blessed with two sons, William and James Wilsey.  Following Norman’s death, she returned to live with family in Caledonia, Minn.

In 1949, Winnie married Robert Klockeman and they were blessed with two daughters, Marion (Klockeman) Draeger and Donna Klockeman. Following Robert’s death in 1962, she remained in their home in Fountain, Minn.  Later in life she moved to Traditions of Preston, Minn.

As the loving mother of four, Winnie was blessed with 10 grandchildren, 31 great-grandchildren and 25 great-great-grandchildren.  She was preceded in death by both husbands, her parents, all her siblings, her eldest son, eldest daughter, a grandson and a great grandson.

Throughout her life, Winnie faced life head on with positivity, incredible strength and resourcefulness.  She had been widowed twice by age 40 and continued to raise her children as a single mother.  She worked as a restaurant cook at many locations in the area, including The White Corner Cafe in Fountain and JR’s in Chatfield, as well as taking on many other jobs in support of her family.  Throughout her life, Winnie emphasized the importance of faith, family and education.  Although she only attended school through the eighth grade, she proudly saw her children graduate from high school, obtain bachelor’s and advanced college degrees.

Winnie was part of many families.  Her immediate family (Klug), through marriage (Wilsey and Klockeman), her community in Fountain, her church family (St. Lawrence O’Toole, St. Columban, Tri-Parish and Holy Family Catholic Parishes) and most recently at Traditions of Preston.

She served in many offices in community groups including the American Legion Auxiliary, Study Club, Birthday Club, Senior Citizens, 4-H Leadership (Fountaineers and ballpark concession stand).  She was also known for taking on odd jobs  of painting, wall papering, cleaning, laundry, clothes alterations, and making crafts (knitting afghans and baby sweaters, Raggedy Ann and Andy dolls, holiday decorations).  She was very involved in her church community through Altar Society, laundering altar linens and serving as church bookkeeper of St. Lawrence O’Toole, and was the recipient of the Bishop’s Medal.

A celebration of Winnie’s Life will be held at 11 a.m. on Friday, October 11, 2019, at St. Columban Catholic Church in Preston, Minn.  Visitation will be held from 5-7 p.m. on Thursday evening, October 10 at Riley Funeral Home in Chatfield, Minn., and one hour prior to the service at the church.  Burial will be at a later date.

In lieu of flowers the family requests donations and memorials given to the American Foundation for the Blind: www.afb.org.