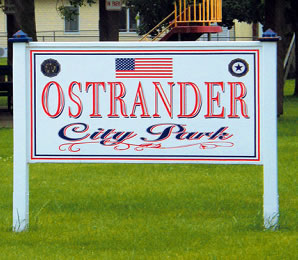 The Ostrander City Council met on October 6, with all members present (Stephanie Start, Dan Hellerud, DJ Start, Vernon Thompson, Mayor Pam Kunert, and City Clerk Wendy Brincks).  There was discussion that several citizens have reported coyotes coming into town.  Council members said that although there is little risk of a coyote attacking a person, there is a legitimate threat to pets.  In particular, residents on Park Street have reported sightings of coyotes.

The council was given an information sheet from the Minnesota Department of Natural Resources, which listed basic information about “Urban Coyotes.”  It stated that coyotes in Minnesota average 30 pounds and stand 18 inches high at the shoulder.  Their common food sources include rabbits, mice, other small mammals, birds, and roadkill or carrion.  Coyotes generally avoid people.  Suggestions for preventing coyote problems include securing garbage containers, confining small pets that are outdoors, vaccinating pets, and shouting at coyotes to scare them away if seen.

Although the city has an ordinance against discharging guns within city limits, Brincks stated that the council could vote to allow a specific individual to use a firearm within city limits, to eliminate the coyotes.  Stephanie Start stated that she’d spoken with Eric Anderson, and he would be willing to get rid of the coyotes via setting kill traps for them.  She said he would first use trail cameras to determine the numbers and locations of the coyotes.  The council voted to approve Anderson to set his traps to eliminate coyotes within the city.

The council discussed whether or not to endorse Halloween trick-or-treating within the city this year, due to the pandemic.  The council voiced concerns that since Halloween falls on a Saturday, there may be more traffic that evening, so perhaps Ostrander should encourage a daytime Halloween event. Stephanie Start suggested checking to see if a local church or the Lions club may consider hosting a “trunk or treating” event, since it would be easier to use social distancing practices at such an event.  The council consensus was to check into that.

Vernon Thompson stated that he recently found out that the parking lot at his church (Trinity Lutheran Church) is actually partially on city land.  The church is looking into repaving the parking lot, but discovered that a large portion is city property, so he asked the council to consider what to do about this.  Thompson summarized, “We don’t own much of the parking lot; the city owns most of it… it’s pretty hard to redo it, when we don’t own it.”  Mayor Kunert stated that the city wouldn’t be able to put funding into such a project until the current infrastructure project is done.  It was suggested that the church council put together a plan of what they wish to have done, and the costs, so that the city could consider the cost and details.  Since the city likely couldn’t fund this until 2022, no formal action was taken at this time.

There was discussion about installing the city’s new “traffic-calming” sign.  The council noted that there have been numerous reports of excess speeding by vehicles coming through town recently.  It was noted that there are already stop signs for traffic running east/west, but no stop signs for north/south traffic.  The council voted to purchase a pole and install the readout sign on the south end of Ostrander.

Due to the election on November 3, the next regular meeting will be Tuesday, November 10, at 6:30 p.m., in the community center.  The public is welcome at all meetings, other than special closed meetings.