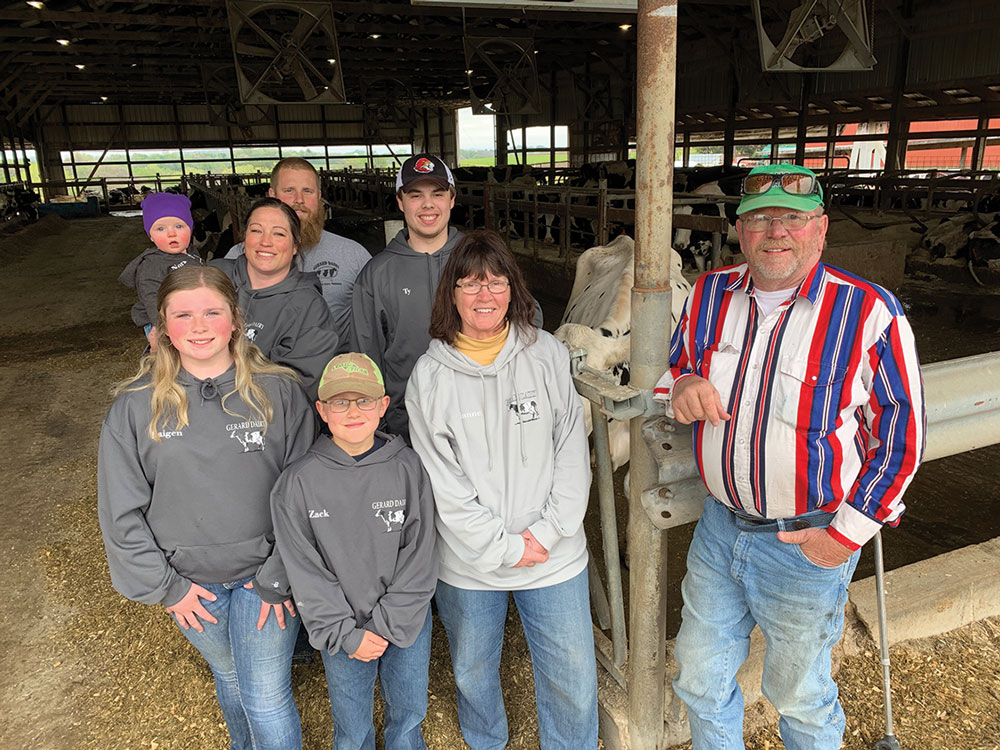 “Something’s gotta change for the good,” said Mark Gerard, whose family has milked cows in the same place on Four Corners Rd. for half a decade.

Gerard, who grew up on a hog and beef farm right down the road, met his wife, Dianne (Stoltz) at a scavenger hunt party when the two were in high school.

Dianne, a student at Caledonia, was helping her friend plan the party.

“She happened to know the Gerard boys (who attended Spring Grove) so we invited them,” recalled Dianne.

Mark and Dianne hit it off and continued dating through high school. In 1972, the couple married. Mark did some trucking before they they purchased the farm where daughter, Darci Cleven, still lives and milks today with her boyfriend, Steve Soland, and four children. 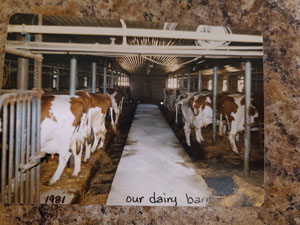 Dianne, who grew up on a dairy farm, said she and Mark started their dairy business milking just one cow, an Ayrshire.

“We sold canned milk at the time. A truck from the Houston/Money Creek creamery would come by daily and pick up our milk can,” she recalled.

The Gerards had converted an old hog house on Mark’s home farm into a makeshift dairy barn. But by the time their herd had grown to 17 Ayrshires, they knew something had to change.

“We had no gutters in the hog house, so we bought the farm here (which adjoins Mark’s home place) and built a tie-stall barn,” said Mark.

The Gerards utilized an SB211 vacuum pump with a hose on it, running two hoses and two buckets.

After purchasing the new farm and building the new barn, the Gerards moved their growing herd to the new place. By then, they were able to justify putting in a bulk tank, and a milk truck came to pick up their milk. 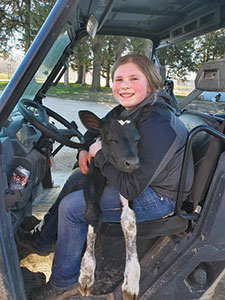 It was a busy time for the young couple, who sold their milk to Potter in New Albin before switching to Swiss Valley.

Just when they were really starting to grow their herd, tragedy struck. And in 1981, they lost all the cows and their milking facility to a fire.

“We had to start all over,” recalled Mark.

Dianne said following the fire, they thought long and hard about whether or not they wanted to stay in milking. After about a year, they decided to rebuild.

“We built a flat barn with five, lever-action stanchions. We had 10 cows, but had gone with Holsteins because they were more affordable,” said Mark.

The couple added a few Jerseys to their herd and grew it to about 100 before putting in a single-8 parlor. 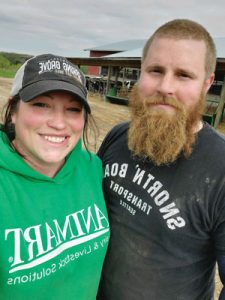 The Gerards have two children, Darci Cleven and Heath Gerard.

Heath does Trout Stream Restoration for Barth Construction and lives in Spring Grove. He has three children.

Darci, a 2001 graduate of Spring Grove, went to Western Wisconsin Technical College for culinary arts before deciding the dairy life was what she really loved.

“Some people think it’s the same stuff every day. But things can be different on a day-to-day basis,” said Darci.

In addition to helping with milking on the weekends, Steve does the feeding, scraping, sorting and field work.

“We do all the feeding and chores and have two hired men who help us milk,” said Darci.

“We also milk Sunday mornings and afternoons, and Monday mornings, so our help can have that time off. That’s the way they want it,” she said.

“It’s nice the kids can be here with me. I can put them to work. If that doesn’t work, Dad gets on the horn,” she said.

Nora, just 6 1/2 months old, comes to the barn and sits in a stroller, unless bad weather dictates Raigen watching her in the house.

Darci said she has early memories of her and her brother playing in a bull pen filled with sand while her own parents milked.

“We played in the sand. Then when we got old enough to walk, we had these scooters we would ride down this little ramp,” she said. 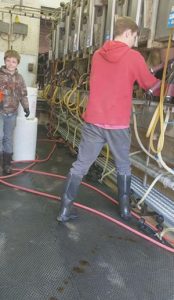 Ty, 15, said he is happy to help, doing whatever the family needs him to do.

He milks on Sundays and also does a lot of the field work.

“She is having a garden this summer and she fixes us lunch quite often. She also helps her grandpa a lot,” said Darci.

Zack, 10, is Steve’s shadow on the farm, helping him run the Bobcat, when needed, and loading manure. 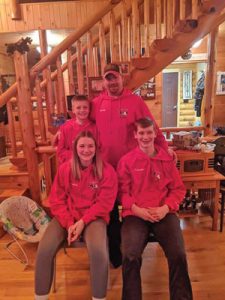 Ty is a member of the FFA Dairy Judging team and secretary for his 4-H club. He has shown Holsteins at the Minnesota State Fair.

“For the next fair – if there is one – I bought an Ayrshire heifer I plan to show,” he said, adding the county is planning to make a decision about the fair by July 1. He also turns 16 later this summer and hopes he will be able to get his driver’s license.

When asked his future plans, he said he is undecided.

“Probably college first, with a plan to come back eventually,” he said.

Raigen enjoys showing and even exhibited at the World Dairy Expo last October.

“It was bought and paid for with her hard-earned money… and a Grandpa loan,” said Darci.

Zack is in his first year in 4-H and has been working with his calf, Snowball. 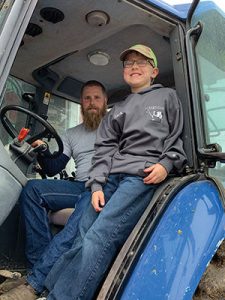 Darci said while farming isn’t always the easiest of pursuits, she couldn’t imagine doing anything else.

“It’s always a challenge, making it all work,” she said.

When asked what it is that keeps her on the farm through all the hard work, Darci added, “I like that I’m a stay-at-home mom.”

Mark added, “Farming is about keeping your head above water and trying to keep everything paid.

“Hopefully these milk prices will have to go up,” said Darci.