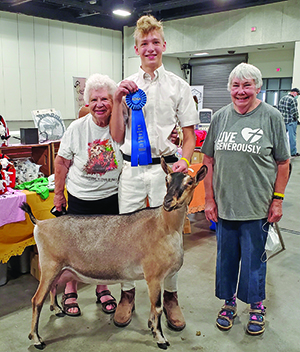 Carlson was awarded Junior Management Champion. This competition consisted of a written test of 30-50 questions testing his knowledge about goats, their care, illnesses, etc. Carlson scored the highest in his age division; the senior division had a single champion as well.

Intermediate Showmanship Champion was another title Carlson earned. In this competition, he was judged on the actual showing of his goat; the skills of the person showing the goat are judged — not the goat itself. Points were tallied on a scorecard by the judges, and each of the four divisions of competitors awarded champion to the top performer.

His fourth champion came from the Toggenburg Premier; this competition was for this specific breed of goat. The Toggenburg is a Swiss breed of dairy goat.

Carlson began working with goats seven years ago as a seven-year-old. His dad, a realtor, had received a goat as part of his commission on a house sale. The Carlsons bought another goat as a companion and then went on to breed the goats.

The Carlsons now have a herd of 30 goats which they raise for show. In the fall, they will sell some of the goats and pare down the herd to 10-15 goats until the new kids are born in the spring.

As a 4-Her, Carlson has shown goats locally and at the state fair, earning reserve champion in 2019. Last year the state fair competition was conducted virtually with the competitors submitting a video. The national goat show which had been planned for Grand Island, Nebr., was canceled in 2020.

This year William traveled to Louisville, Ky., for the week-long event. Anyone who wants to attend can enter, but this is considered the toughest competition in the U.S. There were 3,000 goats at this event. Carlson took his three best goats to the show just for the experience. When asked what he enjoyed most about the show, Carlson replied, “The most fun was talking with people — they are all so nice!”

Carlson has a couple of family friends who are his mentors, Karyl Dronen and Marjorie Kitchens, aka the Goat Ladies.The pair, along with Mary Thompson, are part of the Minnesota Goat Ladies, a “club” in Houston County. The three friends put on a goat show in Caledonia in September.

Dronen and Kitchens have mentored Carlson for the past five years with his goats, as well as his older brother Noah and sister Lilly in the past. They host anybody showing 4-H dairy goats in Houston County at their home and teach them how to show goats. Winners can count on continued support in preparing for the state fair; Carlson had their help in preparing for nationals too.

In addition to showing his own goats, Calrson and two others showed Dronen and Kitchen’s Nigerian dwarf goats in the open class at nationals. With hundreds of Nigerian dwarf goats  at the show and 75 in one class alone, the Goat Ladies were happy to place in the top 10% in the competitions; they received eighth out of 38 in one event.

According to Carlson, the two ladies have taught him everything and continue to do so. He freely admits he still calls them for advice if he has a sick goat. The Goat Ladies still have about 50 goats; they milk their own goats twice a day themselves, currently giving the milk to their neighbors for their show pigs.

The Goat Ladies recognize the work ethic of Carlson and his good parental support. They appreciated his curiosity at an early age when he asked a lot of intelligent questions. They have grown to regard him as family and proudly point to his accomplishments.

Carlson will be able to show his goats in the Junior divisions until he is 20; the national show will be in Harrisburg next year. While he’s interested in showing again, it’s not the only thing he likes to do. He is involved in basketball, piano, speech, Knowledge Bowl, and has already been in five drama productions including the most recent production of Chicago at Houston High School.

William is humble about his accomplishments, but you just need to wonder, “Will he be the GOAT of future national goat shows?” He seems to be well on his way!