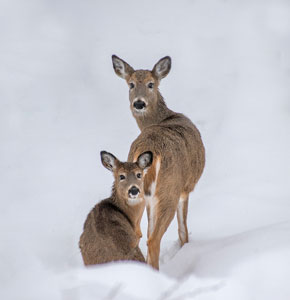 As you know, it’s been a very harsh winter; one of the coldest and snowiest on record! It hasn’t been easy for us or for most of Minnesota’s wildlife. From deer to songbirds — it’s nothing less than amazing that anything has been able to survive. Unfortunately, some will perish.

“We’re starting to get reports of wildlife mortality that is weather related,” said Jaime Edwards, MN Department of Natural Resources Manager at Whitewater Wildlife Management Area. “Most calls have been reporting deer mortality, but we have gotten one coyote death. We haven’t received any reports on turkeys yet, but not many people are out in the woods with this snow depth.”

According to Edwards, deer are most likely the wildlife being reported more because they’re on our radar with Chronic Waste Disease (CWD) occurring. “Most of the emaciated deer are fawns that were born last summer. They typically are the first to succumb to weather extremes since their fat reserves are less than adults. In many cases, they are being struck by cars as they try to find areas where there is less snow cover.”

All wildlife will feel some stress with a severe winter. Some adjust by either moving further south (typically birds) until they reach an area that meets their needs, some will go into torpor – a temporary hibernation. This is common in squirrels. Songbirds will often do ok in this weather as they seek resources on trees and other accessible locations. Now is when you will see berries and fruit on trees get eaten up.

“It’s incredible that anything survives,” Edwards said. “Winter mortality is a natural thing, but if the snow persists, we’ll see more impacts on wildlife. However, if it rains and reduces the snowpack, that will make food more accessible to wildlife and stave off further mortality.”

“Wildlife need food, water and shelter to survive,” Edwards said, “But we have to keep in mind that there is a feeding ban on for deer. While we are seeing mortality in deer due to weather, we really want to stress that it is not good to put food out accessible to deer in light of the presence of CWD on the landscape.”

The DNR have been asking folks to limit the amount of food provided where deer can access it. They want to avoid concentrating deer as that is one way for them to spread or contract CWD. This may sound harsh considering the conditions the animals are facing, but it is what is best for the overall herd in the long run.

The time to help wildlife survive a bad winter is during the growing season. Plant wildlife-friendly shrubs, trees and other plants that might be a winter food source. Offer shelter – bird houses, brush piles and undisturbed areas. If you are feeding birds, you should continue to provide feed. Since most birds have established their winter areas already, putting new feeders out where there were none, may get some use, but it might take some time before the birds find them. Be sure all feeders are at least six feet off the ground.

Here are a few things you can do to help wildlife:

•Don’t burn your brush piles until a little later this spring, as brush piles provide shelter for wildlife;

•If wildlife seek shelter by your home/buildings, try not to disturb them. They need to conserve energy, so if you flush them away, that’s more energy they need to use;

•Keep your dogs and cats contained. Wildlife are more vulnerable during the times when it is harder for them to get around in the snow.

“It’s hard to say what the spring will bring for wildlife survival,” Edwards concluded. “If they went into winter with good fat reserves, they should be ok. Up until the end of January, it was a relatively mild winter, so most wildlife should have been in fairly good shape. One thing we may see as ponds start to thaw is winter kill result of low oxygen and ice depth. We could see fish and turtles dead in spring, but time will tell on that.”