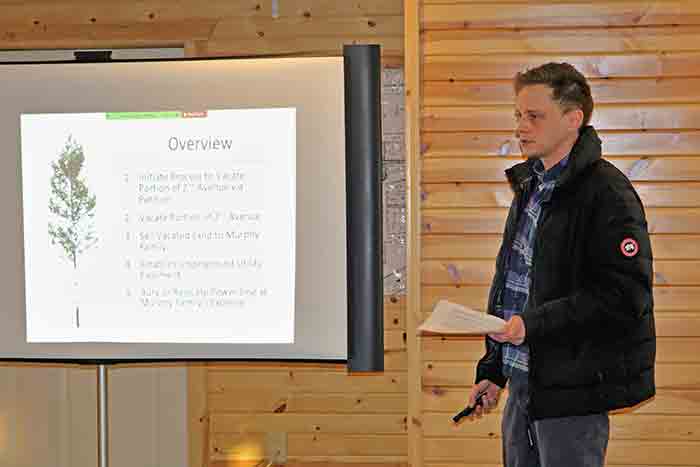 Prior to the regularly scheduled monthly Whalan council meeting on February 14, a public hearing was held at 4:45 p.m., to hear from the Murphy family regarding a proposal for a vacation for a portion of 2nd Avenue.

The Murphy family offered $10,000 to purchase the property, as well as offering an easement for utilities in the future.

After hearing the proposal a public comment period was held, at which time there were no comments in favor of the vacation, only comments opposing the proposal. Mayor Tuftin also read two written comments received by the council that opposed the vacation of 2nd Avenue.

At that time the public hearing was concluded.

Following the public hearing the regularly scheduled February council meeting started with the Pledge of Allegiance, and council members began working on the agenda.

There was one addition to the agenda under Miscellaneous.  The agenda was approved with this addition.

Minutes of the January 10, Whalan council meeting were read aloud by Tuftin, and approved. The Treasurer’s Report was approved as presented.

The council voted to oppose the Murphy proposal to vacate 2nd Avenue.

The council will send out a request of bids for garbage services for the City of Whalan.

The council discussed the MiEnergy project.  MiEnergy is going to go underground with their primary line, but the City of Whalan will still have its own lines and poles.  The project will leave  the City of Whalan with some existing poles that are currently being shared with MiEnergy.  Those poles will become the property of the city.

Peterson questioned what the city would like to do about those poles.  If any of the remaining poles need to be replaced, it is possible that MiEnergy could replace them while they are in town working on their project.  The project would take place toward the end of summer, which is about the same time that the road project will be taking place in Whalan.  The council will further investigate the project to determine the needs of the city.

Fillmore County Assessor Jason McCaslin will be giving a presentation at the March 14 council meeting regarding  how properties are valued, as well as explaining the assessment process and how it relates to property taxes.  Tuftin encourages the public to attend the meeting and ask any questions they may have.