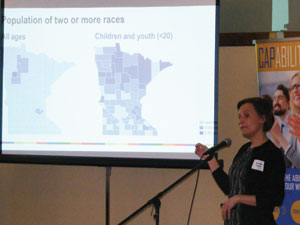 Southeast Minnesota Together hosted a meeting on April 30 at the Chatfield Center for the Arts to discuss the creation of welcoming and inclusive communities. SE MN Together was created in 2015 to serve as a regional network of organizations and individuals developing strategies to address workforce shortage.

Keynote speaker Allison Liuzzi, project director, Wilder Foundation, provided statistics on Minnesota’s changing demographics and the trends leading to a workforce shortage. The second part of the meeting centered on the challenge for communities to stay vibrant and the necessity to welcome and integrate newcomers to our communities to maintain economic prosperity.

Since 2010 Minnesota has had a net gain of 82,000 residents, many foreign born. There has been a net loss of 26,000 residents during this period to other states (some retirees, but most moved to North Dakota for economic opportunity).

In 2026 a workforce shortage of as much as 60,000 is expected. Older adults working longer will likely reduce this shortage by a third.

Job growth in southern Minnesota will largely be driven by health care, services, transportation, and production/trade occupations. Many of these jobs will not require a four year degree.

Minnesota has been a largely “white” state for a long time, but that is changing rapidly in recent decades. There is an economic imperative to bring people into the state to meet the coming workforce shortage, to maintain economic prosperity.

People relocate for economic opportunity and to maintain social connections. Minnesota rates high in the nation with the percent of people willing to volunteer, in the availability of cultural events, and with the number of neighbors willing to help neighbors. The state ranks number one in voter turnout; people are invested in their communities.

A panel discussion moderated by Molly Hilligoss, Midwest Regional Manager, Welcoming America, followed Liuzzi’s presentation. Representatives of organizations that work to welcome refugees and immigrants were on the panel. They build bridges between cultures in communities. They help businesses provide a diverse and inclusive workplace and help them retain staff and a diverse staff. They help newcomers to transition to a new environment and help educate current community members to familiarize them with the newcomer populations

Kindra Ramaker, Mayo Clinic, said, “We are dependent on each other for success.”

The Welcoming America statement says, in part, it should be possible for “newcomers of all backgrounds to feel valued and to fully participate alongside their neighbors.”

Katie van Eigi, Project FINE (Focus on Integrating Newcomers through Education), maintained all people are respected and valued. She suggested taking baby steps to build relationships with newcomers. Find some common ground, be willing to compromise and work with others.

Bonnie Besse Rietz, Apex Austin, advised people to get to know a new neighbor by name, even if they don’t speak your language, saying, “A smile goes a long way.”

Rawhi Said, Diversity and Inclusion Training Manager, Intercultural Mutual Assistance Association, suggested people find a way to leave their comfort zone to become more welcoming and to embrace diversity. He came to this country in the ‘90s as a Bosnian refugee. He said, “I have to pay it forward… the best way I know how.”