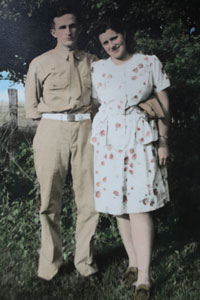 One of 97-year-old Marjorie Scott’s favorite memories of her fiance Robert Bowe was when the two of them would go out on Sunday nights.  They didn’t go out on a fancy dates though.  Instead, Marjorie and Robert would drive down to the small country schoolhouse where she taught, to start the fire in the stove so it would be warm for the students when they arrived the next morning.

Memories like those are all that Marjorie has left of Robert.  He was drafted into the Army and sent to Europe to fight in World War II.

During the Battle of the Bulge, he lost his life and never returned home.

Robert came from a large Catholic family.  Before he was born, his parents immigrated from Ireland to the United States and settled near Preston to farm.  “They were just as hard up as could be,” Marjorie recalled.  Robert finished eighth grade and, as was common at the time, quit school to work on the family farm.

She remembers that Robert saved up for a car when they were dating.  One night, he was taking her to see a movie and when he rounded a corner, the door flew open, and Marjorie almost fell out.  She still laughs when she thinks of that date.

Robert and Marjorie were together for five years.  She doesn’t remember when they got engaged exactly, but knows that their engagement lasted quite a while.  She spent a lot of time with his family, before Robert was drafted and after he left.  “They were very good to me,” she recalled.  “I wasn’t Catholic, you know, but that didn’t seem to matter.”  The couple never got the chance to plan their wedding or even set a date for it.

They had decided to wait until the war was over before moving forward with that part of their lives.

But April of 1945 brought sad news.  The superintendent of the school where Marjorie worked told her that he had received a message that one of the Bowe boys had been killed in action on April 17 and asked her to come along when he drove out to the Bowe farm to break the news to the family.  Marjorie remembers that Robert’s parents were happy to see her when she got out of the car, but when they saw the superintendent, their happiness turned to tears.  They knew what that meant.

“I think it just wasn’t fair that his life had to be snapped like that,” Marjorie said.  Robert had been acting as a scout during the Battle of the Bulge and was struck down during the fight, dying instantly.  Marjorie was devastated when she heard the news, especially since she was looking forward to him returning soon.  “I thought he was coming home.  I thought it (the war) was just about over when I got that letter,” she said.  For the next year, Marjorie lost interest in going anywhere or doing anything.

“I just worked in the flower beds at home and cried tears there,” she said.  “You grew up in a hurry.”

Marjorie was eventually able to move on with her life.  At first, she stayed close to Robert’s family, even visiting his sister while she was on vacation one time.  Eventually though, they lost touch and as of now, another of Robert’s sisters is the only one she still knows the whereabouts of.  Marjorie married and had three children, who she is very proud of.  Throughout her life, she’s always remembered her first love, Robert Bowe.  “I still pray for him everyday,” she said.  “He was a good guy.”