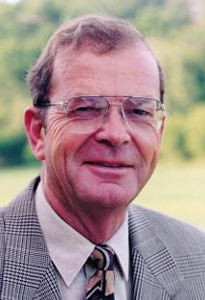 Wallace Dean (Wally) Storhoff, age 85 of Mabel, Minn., took the long road home and passed away of heart failure on May 20, 2020, at home surrounded by his family. He was a kind, patient, loving, and giving man noted for his friendly smile and ability to make genuine conversation with everyone he met.

He was born September 9, 1934, in Lanesboro, Minn., to Selmer (Sam) and Beulah Sorum Storhoff. These were hard times, but he never went without. The family moved to Harmony, MN in 1938. His older sister Lola helped to look after him and soon brother Stafford joined the family to entertain him. Baby sister Janet arrived years later and at one point in time she fit neatly into Wally’s bicycle basket.  Wally attended grade school and high school in Harmony, graduating in 1952, and remained in touch with classmates until his death. He especially treasured his life-long friendship with Larry Laugen. Wally attended Luther College for two years and then transferred to Winona State University. He graduated from Winona State University in 1958 with a degree in education and social studies.

When Wally was a young man, he spotted the love of his life, Sharen Haugerud, the attractive majorette who was leading the Harmony High School marching band down the streets of Granger. They married in 1959 at Greenfield Lutheran Church and their romance flourished for 61 years.

He began his career as a social studies teacher and wrestling coach in Byron, Minn.. Two years later, he was recruited by the State Farm Insurance Company. He earned trips to major U.S. cities through sales awards programs, so he and Sharen got a glimpse of the bright lights. Wally served as an agent in Harmony for 37 years, retiring in 1997.

Wally’s participation in church life was important. He was baptized at Elstad Lutheran Church, Lanesboro, and was a faithful member for decades at Greenfield Lutheran, where he was confirmed and married.

He was a stalwart bass in the Greenfield choir for many years, relishing the direction of Truman Quammen. Wally and Sharen enjoyed polka music and for many years they danced their way across the Midwest at various polka festivals. The ladies said that Wally was the smoothest dancer on the floor.

Wally’s long road took a sharp turn in 1988 when doctors discovered a volleyball-sized tumor in his stomach and he was diagnosed with non-Hodgkin’s lymphoma. Thus began the long-term treatment at Gundersen Clinic, La Crosse, Wisc. Sharen was warned that she would soon be a widow. He and Sharen continued to dance and Sharen thinks that this was a key component in maintaining his health. His cancer went into remission for many years but resurfaced in 2012. Despite the bleak prognosis, Wally defied the odds as a 32 year cancer survivor.

Wally loved to camp and hike ,whether in the Rocky Mountains of Colorado or the Big Woods of Fillmore County. He was an avid golfer for many years, dropping a hole-in-one on number nine at the Harmony golf course. His passion for the Green Bay Packers was fabled. Wally volunteered in his retirement by delivering meals, driving senior citizens to appointments, and reading aloud to nursing home residents. He was a prolific reader, especially during the long winters.

He was preceded in death by his parents, sister Lola Johnson, brother Stafford Storhoff, and constant companion, Rookie, the chocolate Labrador.

The family is grateful to the  professionals from Gundersen Health System Hospice, La Crosse, Wisc., for their exceptional care. Many thanks to dear friend and pastor, Rolf Svanoe of Greenfield Lutheran. Heartfelt appreciation goes out to the Mabel Ambulance crew, extended family, the Scheie Lutheran Church community, and friends near and far for their support.

At his request, Wally’s body was donated to Mayo Clinic in Rochester for educational purposes. In honor of Wally, memorials may be directed to the Greenfield Lutheran Church organ fund or a charity of your choice. Due to Covid-19, there will be a memorial service announced for a later date.