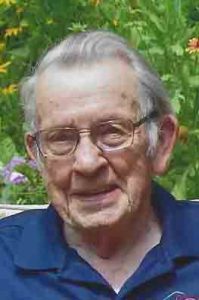 Wallace Peter Vogen, 92, of Chatfield, passed away July 17, 2022, at Seasons Hospice in Rochester.

Wally was born May 6, 1930, in rural Lanesboro to Alvin and Edna (Johnson) Vogen.  He graduated from Lanesboro High School with the class of 1949.  On January 10, 1959, he married Rosella Fasbender at St. John’s Catholic Church in Rochester.

Wally served as an auto mechanic in the United States Army from 1954 to 1956.  Upon honorable discharge, he was employed at IBM for 32 years and after retirement worked part-time at Tuohy Furniture and NAPA Auto Parts.  He was a member of St. Mary’s Catholic Church and the American Legion Post 40 Lanesboro.  In September 2016, he participated in a Freedom Honor flight.  He enjoyed camping, bowling, and horseshoes.

He was preceded in death by his wife, parents, and brother Allan.

A memorial Mass will be held at 11 a.m. on Thursday, July 21, 2022, at St. Mary’s Catholic Church in Chatfield, with Reverend Edward McGrath officiating.  Visitation will be held at St. Mary’s Catholic Church from 5-7 p.m. on Wednesday, July 20 and one hour prior to the service on Thursday.  Burial with military honors will be in Calvary Cemetery in Chatfield.