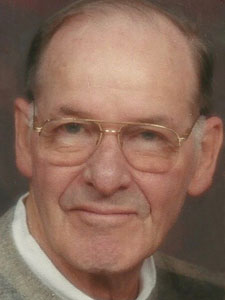 Bud, or Doc as he was sometimes known, was born January 22, 1925, the third of four children, to Ruth (Allan) and Arthur Karli. He grew up on a farm near Valley Springs, S. Dak., where he attended a one-room school house until high school age. He chose to attend a high school in Brookings, S. Dak., that met October-March to accommodate farmers.

In 1940, at the age of 15, he left home and school to work odd jobs at farms outside of Minneapolis near one of his brothers. He enlisted in the Navy in 1943 and was assigned to the Armed Guard to man the anti-aircraft guns on supply or troop ships. He served in the Asiatic-Pacific campaign on three ships: SS James B Bonham, SS Luxembourg Victory, and SS Alfred C. True. His postwar assignments were to Treasure Island, Calif., and then to Adak Island in the Aleutian Islands. In the evenings, he worked to complete his high school diploma through USAFI (United States Armed Forces Institute). He also completed correspondence journalism courses through the University of Minnesota. After an honorable discharge in 1949, he started classes at the University of Minnesota and boarded with a family in St. Louis Park. Living next door to this family was Elizabeth Ann Haug (Betsy) who he met and, after a few months of dating, married in September of 1950. He graduated from the University in 1956 with a Doctorate of Veterinary Medicine.

After graduation, Betsy and Bud settled in Mabel, Minn., where he practiced as the sole veterinarian for the area for 16 years. Together they raised their family of three children: Anne, Susan and Steven. The demands of his veterinarian practice often took precedence over social activities, but in summer he was usually able to participate in social Thursday nights with his friends at the Ma-Cal-Grove golf course.

When the opportunity arose to join a multi-vet practice, they moved to Waukon, Iowa, in 1971, where they lived for eight years while their children attended college and began their careers. Bud and Betsy then moved to Bella Vista, Ark., in 1979, where Bud worked as an Inspector-In-Charge for USDA’s Food, Safety & Inspection Service in Decatur.

Bud retired in 1988 and with Betsy, spent his early retirement years traveling and visiting family and friends around the country. He loved reading, birding, woodworking, and making things for his children and grandchildren. He also enjoyed the challenge of improving daily living tasks. For example, when he became dizzy looking up to retrieve and fill a birdfeeder, he rigged up pulleys and rope to lower the bird feeder to accommodate filling. In his woodworking shop in the walkout basement, there was a sliding door that he connected to a radio so that it would play while the door was unlocked. Once the door was locked, the radio stopped playing. It was his way of reminding himself to lock that basement door.

He loved the outdoors and often knew (and kept secret) the locations of wild asparagus, mushrooms and hickory nuts. During his days of driving the country roads as a veterinarian, he would sometimes spot old car parts on the farms he was called to and was able to secure enough parts to restore and re-assemble Ford Model A and T cars.

One of his early projects was building a houseboat, Hi-Hopes, in his office garage in Mabel, which he successfully launched and enjoyed summer days on the sandbars along the Mississippi River outside Brownsville, Minn. Bud also allowed that garage to be used for various community activities; high schoolers could build parade floats in the garage, the Lions Club could socialize there at the end of each Steam Engine Day celebration, and the space served as the storage site for seasonal Pioneer seed corn and Girl Scout cookies.

He was preceded in death by his parents, wife Betsy, daughter Anne (Mark) Rodman, and brothers Harold, Lester and Merle.

Graveside service will be 1 p.m., Saturday, August 10 at the Mabel Lutheran Cemetery.