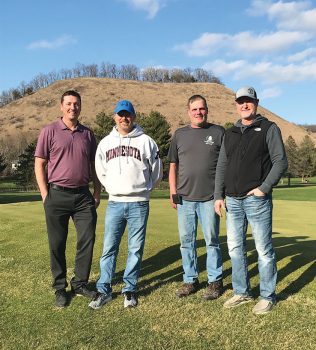 The only 18-hole golf course in Houston County opened April 1, 2022, under new ownership. Jim Wieser, Bill Schmitz, Scott Iverson, and Dave Bubbers were able to play a round of golf on their new course that day; the next day it snowed, forcing them to cancel a college golf tournament scheduled on the course.

April’s weather hasn’t been very cooperative for the new owners with just a few nice days, but die-hards have still been coming out to play. Valley High is usually the first golf course to open in the area due to the lay of the course and its soil. After the chilly start to the season, the club was able to host the TRGA (Three Rivers Golf Association) the weekend of April 23-24.

When asked how they came to take on this venture, everyone looked at Jim Wieser. Jim had noticed the golf club for sale on Marketplace and his interest was piqued. He mentioned it to Bill Schmitz who was “kind of interested” as well. Bill talked to Scott Iverson and Dave Bubbers and soon the foursome were purchasing the golf club, which had been for sale for about two years. The four men have known each other for quite some time. Dave and Bill are brothers-in-law and Scott is married to a cousin of Jim’s.

The men bring varied skill sets to their partnership. Jim Wieser is a superintendent at Wieser Brothers; he has taken on responsibility for the golf course onsite grounds and equipment. Scott Iverson works for a non-profit, ORC Industries, and deals with the in-house business financials and technicals. Bill Schmitz owns the TimeOut Tavern in La Crescent and will be using his experience to run the bar and restaurant at Valley High. Dave Bubbers, an electrician at Graf Electric in La Crescent, calls himself a jack of all trades for Valley High. The men shared that they’ve been taking a “shotgun approach” with all of them trying to do it all right now. They’ve noted there have been a lot of “squirrel moments” as they get up and running.

In charge of day-to-day operations are Jim Bastys who is the superintendent of the course and Joe Smader who is the clubhouse manager. Eventually, Valley High hopes to employ about 20 employees.

The new owners acknowledged that the course has been a lot more work than they expected. Added to the recent weather challenges, 19 trees went down on the course during recent storms and needed removal. In addition, they’ve had the challenge of getting all the equipment up and running for the season. The men are all locals and make a point to use small, local companies for any work they need done.

Changes in the near future are centered around the restaurant and bar. They look forward to bringing Valley High back with a great menu. They’ve added homemade pizzas and flatbread to their menu along with burgers, croissants, and other sandwiches. More food options are planned soon for the clubhouse.

Banquet facilities are available with seating for 100-125 and a dance floor. They have already held a benefit at the facility and have a graduation party booked.

No major changes are in the future for the course — it’s already a great course that golfers enjoy playing. Memberships purchased for the year are already in place and will be honored. There may be new promotions in the next year. The course known for the tree in the middle of the green on hole #16 will remain as is for now.

The vast majority of the tournaments held at the club are for charitable causes or in memory of someone. On May 21 and 22 the Valley High Armed Forces Day 3-man Calcutta Scramble will take place. Thirty-two teams will play with 10% donated to the Wounded Warrior Project. Interested teams can sign up at ValleyHigh@acegroup.cc or call the club at (507) 894-4444.

So far the foursome have had no disagreements making decisions. According to Bill Schmitz, they ask themselves, “Will it make the course better? Will it make the clubhouse better?” to drive decision making. The biggest challenge right now to their business is the same as any business — costs. Gas and food prices are taking a bigger bite out of their profits.

The goal of the new owners is to appeal to the people in the area. They are not looking to compete with more distant golf courses.They also look forward to encouraging more young people to take up golfing. Currently, they are cooperating with the La Crescent and Houston schools and are their home golf course. Student golfers are offered a discounted price on membership for the summer as well.

The course is open from sunrise to sunset for golfing (as long as there’s no frost). The clubhouse hours are to be determined — as more people come visit, more hours will be added. Jim, Bill, Scott, and Dave look invite you to come visit them soon at Valley High, located just off highway 16 between Houston and Hokah, for golf, food, and drinks!