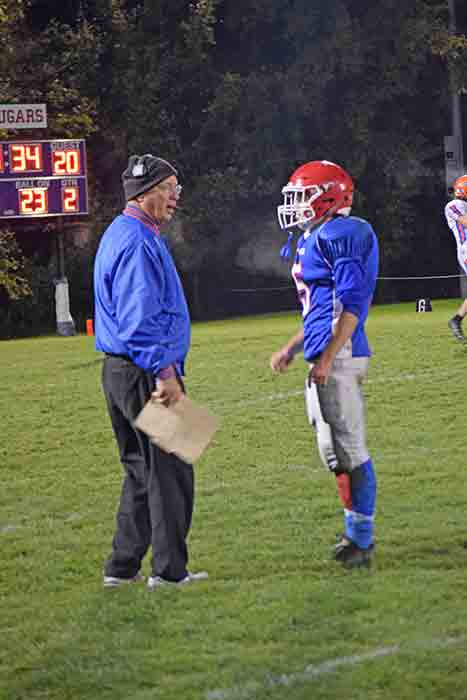 Later this spring, the Mabel-Canton baseball team’s season will come to an end. And with it, the career of Karl Urbaniak will end, after decades of coaching student-athletes and teaching in the classroom. When asked to reflect on his career, Karl shared details on the twisting path that eventually led him to Mabel-Canton. He recalled, “I graduated from high school in 1970. I’m from northwestern Minnesota, about 20-some miles from Canada, and about 14 miles from North Dakota. It’s a small town of 500. So I grew up playing all the sports… football, basketball, baseball. I went to Minot State, out in Minot, North Dakato.” In college, Urbaniak played four years each of football and baseball, and one year of basketball. He understated that, “I had quite a bit of success at Minot State,” which is confirmed by his induction into that school’s athletic hall of fame in 1996. The university’s website lists Urbaniak’s athletic accomplishments, including being named an all-conference baseball player three times, and being honored as the conference MVP in football in 1974.

After graduation, Urbaniak took jobs teaching school in the area, and got into coaching, as well. Later, he moved to Mankato State University, where he was a graduate assistant coach of the defensive backs on the football team. During that time, Urbaniak also obtained his Master’s in Physical Education and a major in social studies.

The other major accomplishment that occurred at Mankato State was that Urbaniak met another graduate assistant named Paula, and the two began dating. Urbaniak said that he then felt the urge to again teach in a high school setting, and he heard of such a job in Harmony.  He explained that at Harmony, “I was the baseball coach, basketball coach, and social studies teacher. And that was right around ’80, ’81.”

At that time, Paula had taken a job in Battle Creek, Mich., as a corrective therapist. Karl recalled, “So I finished the year at Harmony, and then I went out to Battle Creek, Mich., thinking well, I can get a job out there. I’ve never had any trouble getting a job.” But because of the economic conditions at that time, the auto industry was in a pinch, which greatly impacted everything in the Battle Creek area, due to the many factories that made automotive parts.

Urbaniak worked part-time coaching and teaching, and learned to stretch a dollar during those lean times. He and Paula were married in 1982, and in those years, he spent time coaching at both the university and high school levels. But when Karl and Paula discussed starting a family, they agreed that they wanted to move back to a small town area in order to raise their kids.

When Urbaniak heard of a teaching and coaching vacancy at Mabel-Canton, he realized it was close to Harmony, so he knew and liked the local community. He added that one benefit of southeast Minnesota is that it’s roughly midway between his roots in northwest Minnesota and Paula’s hometown in the Chicago area.

“So, in 1985/1986, I started teaching here in Mabel-Canton, social studies, phy ed, health, and head football and head baseball… I guess the rest is history,” quipped Urbaniak. Over the years, he’s also coached basketball in various stints when needed. He added, “And I’ve taught a ton of things in the school!”

When asked about his philosophy on coaching, Urbaniak said he liked to explain to his athletes, “My goal is to help you learn to play the game the way it’s supposed to be played… and then the next thing I talk about is, your toughest opponent is yourself.” He added that he’s always believed in the philosophy of “there is no free lunch,” and that he has given playing time to the athletes who earn it, by hard work at practices.

Urbaniak explained that although he and Paula had sometimes considered moving on from the Mabel-Canton area to pursue their careers elsewhere, they never felt the time was right to leave. He fondly recalled the many times he noticed a “sparkle in the eye” of a young athlete and then proudly watched over the years as that particular athlete would develop into a standout ball player and person. Karl added, “And then, sometimes you have a perfect storm, where you have about five, six, seven, eight of those kids (on the same team), and then that is very exciting!” Urbaniak said he’s always enjoyed watching local athletes go on to play in college, as well.

When asked about his career achievements, Urbaniak didn’t mention statistics or wins versus losses or conference titles. Instead, he talked of the many examples of athletes and/or teams that exceeded expectations, or the fun of coaching athletes whose parent had also played on Urbaniak’s team. He also cherishes the many athletes he’s coached who have later also gone into coaching.

One example of this is Paul Tollefsrud, who stated, “I’ve coached with him for the last sixteen years, and when I was going to high school, I was a player for him, so I’ve been on both sides of it.” Paul added, “He’s had a huge impact on my life, and decisions that I’ve made. That’s another reason why it’s tough to see him go.”  When asked about Urbaniak’s coaching style, Tollefsrud stated, “He really gets the most out of his athletes. He cares about each and every one of them.”

In looking ahead to his retirement, Urbaniak said he and Paula plan to travel and visit family throughout the United States. He said that for many, many years, his schedule has been very full with practices and games, so the sudden void will be an adjustment, but he’s eager to enjoy filling up those hours.

In looking back over his coaching years, Urbaniak pointed out that there have been numerous occasions when he’s gotten wrapped up in details of a game or a season, and Paula has helped him refocus on what really matters. He said that when needed, she’s kindly reminded him that, “Karl, what’s most important is, what kind of 25-year-old is that kid going to be?” He added, “That really does kind of put things in perspective.”

When asked to comment about his classroom teaching years, Urbaniak pointed out that he feels that Mabel-Canton and many of the local schools have done an excellent job with distance learning and overall education through the pandemic. Although he’s heard of students from other countries and urban areas commenting that distance learning was essentially “a joke,” Urbaniak doesn’t feel that’s true in southeast Minnesota. He said of the local teachers and administrators, “I think they made the best of a tough situation… I think the community should be pretty darn proud of that.” Clearly, Urbaniak’s teaching and coaching years at Mabel-Canton is another thing that generations of students and athletes in southeast Minnesota are proud of, and for good reason.