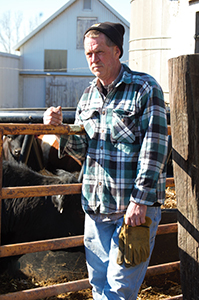 A Sunday drive in the Driftless region southeast of Spring Grove led to a herd of unfamiliar black and red cattle with a white belt around their middle.  Not recognizing the breed required stopping to take pictures, not realizing there was also a story to tell. Following is the story of a three-generation family cattle operation and their unique cattle.

Luther Groth originally from the Postville and Frankville, Iowa, area, in a horse-drawn buggy moved to a farm south of Spring Grove that he purchased from neighbors. That farm has now been in the family close to 100 years. His son, Duane Groth, lives on the family farm, and grandson, Lee Groth, lives down the road. The family’s cattle operation has grown to a herd of an estimated 500 cattle. The elder Groth was also well-known in the area as a cattle buyer. He purchased and sold cattle for 57 years.

Cattlemen like the Groths are a unique breed of men who respect their cattle.

In the dark and in the day.

We still have to feed them hay

We feed them before we dine

I can’t tell you y or how

But we love our dang ol cows

From longhorns to Angus

It’s just how God made us

Gazing on them from hilltop high

We live for a cow till we die.

The red and the black cattle with the white belt are beef cattle known as BueLingos. Duane Groth started his herd of BueLingos approximately 16 years ago when he purchased his first bull and three heifers from Danny Meyer of DAN-DEE BueLingos in Loyal, Wis. Meyer helped to “shape the future of a distinctive beef breed” Mills FarmLife, Spring 2005.

The Groth family proudly boasts that they have one of the largest herds of red and white BueLingo in the Midwest BueLingo Cattle Association. According to midwestbuelingo.com, the Association was organized in 1999 to “share information with members and the public on the BueLingo cattle.”

The Groth herd of 500 consists of red and black belted cattle. The senior Groth is not only a cattleman; he is a skilled storyteller. One of the first stories he shared caught my attention. He described how he watched their bull effortlessly push a large round bale of hay, weighing approximately 1,800 pounds, around.

One of the farms owned by the family is home to a small campground. The younger Groth shared that campers really enjoy watching the BueLingos, which they have never seen. The campers refer to the black and white BueLingos as “oreo cows.” 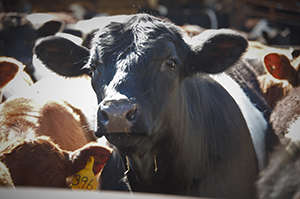 Story of the BueLingo

The history of the BueLingo is a one-of-a-kind story, as well as an educational story. According to the Mills FarmLife, two life-long friends, North Dakota cattleman Russell Bueling and Russell Danielson, Professor of Animal Science at North Dakota State University, started work on a “retirement project” for Bueling. The men set out to “develop a unique breed of belted cattle that would contribute to the beef cattle industry.”

The BueLingo cattle are not named after the bue in Bueling.  During their research, Bueling and Danielson met Alfred and Bernice Ostrum from Montana who became a partner. According to Mills FarmLife, “Bue was Mrs. Ostrum’s maiden name, and she was the first person to breed Dutch Belted dairy calves with black bulls.”

Composite cattle defined by cattlesite.com are “a new breed of cattle bred specifically to improve hybrid vigor.” The easy to identify white belt is a result of breeding with Dutch Belt “Lakenvelder” dairy cattle. Their genetics also come from breeding with Angus, Limousin, and Shorthorn.

The BueLingo was declared an official breed in 1988, according to BueLingo World.

Characteristics of the BueLingo

Calving season is in high gear at the Groth farms. Father and son both explained that immediately after birth, the calf is up before their mother and is “running across the field within 15 minutes.” The mothers are very good mothers. They are also easy to work with.

To be registered, there can be no white on the cattle except for their belt.  The belt must go completely around and not go behind the hips, or in front of the girth. The elder Groth explained that he has one chocolate with a perfect belt; looking back, he wishes that he had not castrated him.

The younger Groth shared that he and a buddy were grilling burgers when his friend asked, “Why would one ruin good beef with spaghetti sauce?”

The elder Groth firmly states that the meat is “the tenderest meat you have ever tasted.” If you are not a believer, Groth describes how to eat ribeye steaks. They are so tender that you do not have to chew the meat, just swish the meat around to break it up, and swallow. The senior Groth shares a secret to a good tasting steak. He likes his steaks cut 1½”  thick. He mentions that “onions and a touch of Worcestershire sauce are all one needs on a T-bone.”  The hamburger is 95% lean, and only one slice of bread is needed to soak up the juices.

The BueLingo Beef Cattle Society explains in their promotional brochure that BueLingo beef is sold through private sales and meat processors. If interested in purchasing locally raised BueLingo beef, contact Duane Groth at (563) 735-5914.

Take a Sunday drive and check out the beautiful BueLingo cattle on the Groth farm.