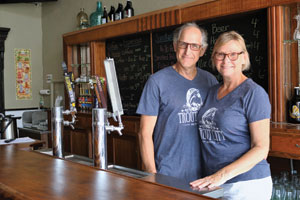 Prepare your palate, as there is a new business opening in Preston, Minn., that will tempt your taste buds and quench your thirst while providing a comfortable and casual brewpub atmosphere in a building rich with history.

Trout City Brewing, owned and operated by Andy and Anita Bisek, is a new venture for the couple as they have spent years purchasing and renovating houses in Preston but decided to take on a different type of project.

“We saw the sign in the window, we called the realtor and asked if we could take a look at it,” says Anita.  “We walked in and we both went, ‘Oh my gosh, this building is so amazing,’” she explains. “We fell in love with the building,” she states.

The Biseks purchased the building in April 2018.  “We wanted to make sure it was renovated and saved,” notes Andy, as the building was built in 1889 and they wanted to breathe new life into it.

“Once we purchased the building for renovation, then we started asking ourselves, ‘Now what is going to happen to it,’ and that’s when we came up with the idea of a brewpub,” states Andy. “We thought this would make a really nice brewpub — it’s just so pretty,” Anita comments.

After speaking with their son Curt, 35, who has brewing experience, and asking if he would be interested in being the head brewer and receiving a resounding, “Yes!” as a response, the couple was all in.  “That’s how we got into it,” states Andy.

The couple renovated the upstairs for their living space and have made some improvements on the main level, such as removing carpet and painting, to set it up for use as a brewpub.  “We tried to maintain the history of the building,” says Anita.

The 130-year-old building, which was most recently used as an antique shop, was originally built as a bank and one of the many things that is distinctive to Trout City Brewing is the fact that of the two restrooms in the business, one of them is located in the former bank’s old 1880s safe.

Beautiful transom stained glass windows emit a warm and inviting light  that shines down on customers while they admire the grand old fireplace, high ceilings and original woodwork.

Although the main part of the bar and the bar back at Trout City Brewing looks as though it has been in place for years, it was actually relocated from the Aroma Pie Shoppe in Whalan, Minn., after being used for decades by various businesses in that building.

The renovation included making spaces for a brewing area and a kitchen as well.  With the changes and improvements that have been made, Trout City Brewing has the look and feel of a historic bar that, if a person did not know better, seems as though it has been a favorite of patrons for many years.

Aside from seating in the main area there is additional seating in the breezeway and in the soon-to-be completed patio area.  Each of the three seating areas provide a different vibe — each being relaxed and comfortable. “We want people to come in and feel at home,” explains Anita.

Trout City Brewing currently has nine taps for beer and because they have a full liquor license, they can not only sell their own craft beer, but can also buy kegs of beer and serve other manufacturers’ beer, including Michelob Golden Light, Lift Bridge Mango Blonde, Mankato Mad Butcher and many other types of beer.

Soon, approximately by Labor Day weekend, Trout City Brewing will have four of their own beers ready to serve.  These include:

1) Easy Rider Blonde Ale — light in body, light in color, good hot weather drinking beer. “A bit of a nod to the local blue smoothie beer I grew up on,” says Curt.

3) Egomaniac Rye IPA — a more traditional IPA with a solid malt and rye backbone that is equally hoppy on the palate as it is in the nose but with a nice clean finish.

4) Stout It Out Loud Oatmeal Stout — a classic stout, dark and rich, without being sweet with a nice body and a silky texture.

Many other types of beverages will be offered including wine, ciders, sangria, spiked refreshers, and non-alcoholic drinks such as Lift Bridge sodas, mochas, lattes, coffee, espresso, and more.

There will be food choices all day beginning with breakfast or brunch options like scones, bear claws, and cinnamon rolls.  Lunch and dinner choices include a smoked polish sausage or hot dog and sandwich options are Swedish meatball, chicken salad or pulled pork served on either white or rye bun.  Each choice comes with chips, coleslaw and a pickle.

Trout City Brewing also has merchandise available for purchase — beer glasses, hats, shirts and stickers, which are sure to be popular.

Their youngest son Frank, 31, designed the logo for Trout City Brewing, which features a rainbow trout and they have gotten a lot of positive feedback on the logo.  Their oldest son Tim, 37, is also very excited about his parents’ new venture at Trout City Brewing.

Trout City Brewing held a soft opening the weekend of July 26, 2019, which went “really well,” says Anita.  There were quite a few people that came and “everybody seemed to like the place,” added Anita.

“We are excited and happy to start a new business in a town that we really love so much,” states Anita, and they are very thankful for the support of family, friends and other businesses.  Trout City Brewing is located at 132 St. Anthony St. S., in Preston.

For more information phone (507) 272-9889, visit the business website (currently being designed) at troutcitybrewing.com or www.facebook.com/TroutCityBrewing.