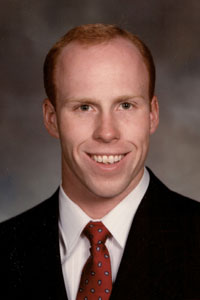 Tracy was born August 29, 1966 in Decorah, Iowa, to Joey and Dawn (Wright) McCabe.  He attended North Winneshiek High School, lettering in track and basketball, was inducted into the National Honor Society as a junior, and elected class treasurer as a senior. He also received the Iowa State Bars American Citizenship Award his senior year and graduated with the class of 1985.

He attended Iowa State University, graduating in December 1989 with a Bachelor of Science degree in Industrial Technology.  While at ISU, he was an active member of the Air Force ROTC from 1985-1987, reaching the highest possible rank of Cadet Master Sergeant in his division of the Corps. Other positions held in the Corps were Flight Sergeant, First Sergeant, and Arnold Air Society Comptroller.  He represented the Corps on the Science and Humanities Council.  He was also a member of the Color Guard, Arnold Air Society, and the prestigious Phantom Drill Team.  He received a number of awards in the AFROTC such as the distinctive GMC award, the Athletic Excellence Award, the American Veterans Award, and a Letter of Commendation. His dream was to attend flight school and serve in the Air Force as a pilot, but due to health reasons, he was unable to continue the program.  After ISU graduation, he moved to the Minneapolis metropolitan area where he worked jobs in the IT field.  He was working as a Senior Network Engineer with Optum Technology/United Health Group for the last 15 years until his death.

He enjoyed doing woodworking projects, being outdoors and working in his yard.  He was extremely proud of his yard and all the landscaping areas he had designed.  Other hobbies included shooting pool, watching the stock markets, playing the lottery, collecting coins and learning to play guitar.

A visitation will be held from 4–7 p.m., Wednesday, September 19, at the Mengis Funeral Home in Mabel.  Private burial will be in the Burr Oak Cemetery.