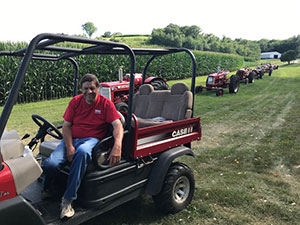 “Linus Hammell knows a thing or two about tractors. As co-founder of Hammell Equipment, he has been involved with tractors and other farm equipment all his life. According to the Hammell Equipment website, Bernard and Linus Hammell acquired the Allis-Chalmers dealership in Chatfield in 1976, then built a dealership in Rushford in 1978. In 1992, they expanded into Eitzen, and in 2008, they purchased the Case IH dealership in Harmony. And for the past 30 years or so, Linus has been purchasing and maintaining tractors in his personal collection, as well.

On July 31 and August 1, Linus displayed his tractors in a “stand still parade” lineup for anyone who wished to come view them. When asked how many tractors he owns, Linus, in his understated way, replied, “Quite a few.” This reporter estimated the number at well over 50. Linus did admit that he doesn’t know anyone who has a larger personal collection of tractors.

Although he generally doesn’t run his tractors in actual parades or tractorcades, Linus has tried to get all of his tractors outside at least once a year, so that others can stop by and view his collection. He recognized that this year, due to the pandemic and related economic woes, more and more people are struggling to make ends meet. So, he chose to put up a box for freewill donations to the local food shelf. Linus stated, “I appreciate everybody coming that did come. We’re doing it mainly for the food shelf.  It gives me a good reason to get them out and get them running.”

Linus stated that it took he and a few helpers three days to get all of the tractors running and driven to their assigned spots in the lineup at his property in rural Lanesboro. And it will take about that long to get them put away again, since they must be carefully parked tightly together to fit into the two buildings where the collection is stored. But Linus doesn’t view it as a chore; he speaks of it all as a hobby.

The collection includes several different brands of tractors (Deere, Allis-Chalmers, Minneapolis Moline, and International) ranging over many decades. His oldest tractor is a 1935 Farmall. When asked if he has a favorite, Linus answered, “No, not really. They’re all good. I love them all… The three John Deeres are my dad’s original tractors. He bought the 630 and 520 brand new in 1957 and 1958… so them I drove many, many hours.” Linus pointed out that in his entire collection there are no duplicates; each make and model is unique.

Describing how he obtains his tractors, Linus replied, “Most of these are all local trade-ins or whatever. Or else I’ll see one that somebody has for sale, and I’ll buy it if I don’t have it.” Linus has no immediate plans to stop adding to his collection. 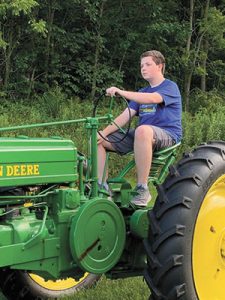 During the stand still parade, a young tractor enthusiast was asked what he thought of the event. Seth Lloyd commented, “It’s pretty cool… it’s a huge collection. I really like the fact that you could actually get up close, and touch, and actually sit on the tractors.” Seth said his favorites were the John Deere tractors from around the 1940s.

Seth’s brother Devin also shared his opinion, saying, “It was pretty cool that I actually got to sit on the tractors.” He also appreciated the ATV ride that Linus provided to the boys up to a hillside, overlooking the entire valley. The boys also enjoyed the life-size cow statue that Linus had brought from its usual home at Hammell Equipment.

Linus summarized his feeling about the event, saying he wasn’t concerned whether there were only a few people, or a few hundred, who showed up. He said whatever amount people chose to give would be helpful to the food shelf. And it’s clear that Linus truly views his collection not as something to hoard, but as something he wants others to enjoy along with him.