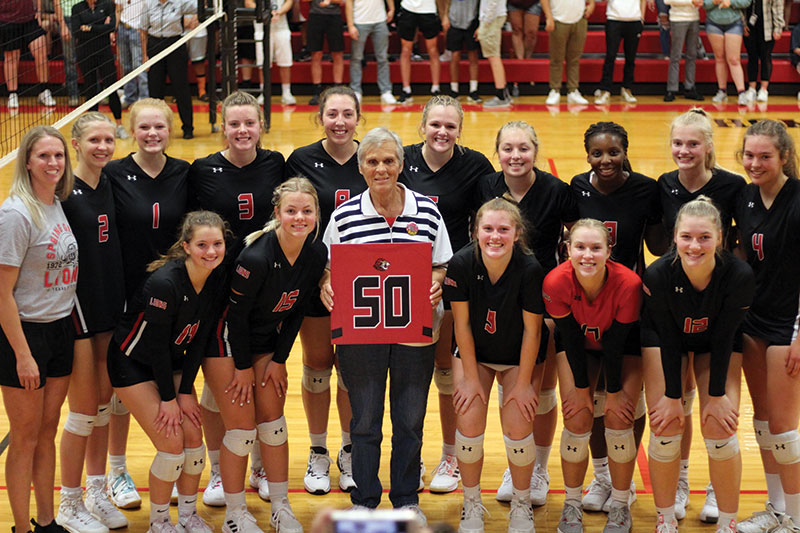 Title IX, a section of the Education Amendments signed into law by President Richard M. Nixon on June 23, 1972, celebrates 50 years.

Title IX is a mere 37 words, but the words have a much deeper meaning, as was found out over the past 50 years.

“No person in the United States shall, on the basis of sex, be excluded from participation in, be denied the benefits of, or be subjected to discrimination under any educational program or activity receiving Federal financial assistance.”

“Title IX got girls sports started in Spring Grove. Title IX mandated that girls have the opportunity to participate in sports,” according to long-time Spring Grove PE instructor and coach Barb Allworden, the 2022 Spring Grove Homecoming guest of honor. “It is what the girls needed and what they deserved.”

According to an article on www.espn.com, March 22, 2012, an ESPN senior writer shared a three-prong test, a set of compliance standards for athletics, any one of which a school had to meet:

1. Female sports participation must be proportional to female enrollment in the school.

2. The school must show a recent history of expanding sports offerings for women.

3. The interests and abilities of female athletes must be fully and effectively accommodated, as documented by regularly administered surveys.

Spring Grove is honoring Barb Allworden, who was integral in starting the girls’ athletic program in Spring Grove. She was honored at the Friends & Alumni Bash on Friday, October 7. In addition, she was recognized at a recent volleyball game, and shared her story and offered advice to the students.

Allworden taught for 34 years at Spring Grove. In 1972 she was hired as the PE instructor. In 1973 she started the sports program and began coaching.

In 1973-74 Allworden coached volleyball, basketball, and track team. She noted that it was interesting coaching track as there was no track at the school. She also oversaw the GAA (Girls Athletic Association) for girls who did not want to participate in sports but still wanted to be involved with sports. She was also the cheerleading advisor, concession stand supervisor for the boys team, and bus driver.

“Yes, I was quite the disciplinarian. I wanted to develop good people,” quipped Allworden. She explained that it was either my way or the highway, which may account for the record number of sports awards on the wall in the gymnasium.

PE teachers taught lots of basic skills. “When I coached, I stuck to the skills. I did not get fancy. Which is why I was not a good basketball coach,” shared Allworden.

Allworden explained, “When volleyball first started, I had the C, B, and A practice together. I scrimmaged the C against the B, the B against the A, and sometimes I sent the football boys into scrimmage against the A team.”

“I ended up coaching golf. I found it to be kind of interesting because I wasn’t a golfer. I thought it was the dumbest sport, but they needed a bus driver, so I had my bus driver’s license, so I became the golf coach. Out came the book; this is what you need to do. I took up golf in my late 40s and loved it.

In addition to speaking to the classes, Allworden met with the volleyball team on Monday afternoon, October 3, and not only shared her memories but also some advice, “Do what the coach tells you to do.”

Allworden acknowledged the boys’ sacrifice as they had to give up the gym because there were three girls and three boys’basketball teams.

Superintendent Rachel Udstuen shared that as she listened to Allworden speak to the classes, she was happy to see the boys’ reaction. The boys shared that it was unfair to the girls back then that there were no organized sports for girls at the school.

Her friend Kathy Johnson was a business teacher at Spring Grove from 1976-1982. Johnson was a helper, like others who did not want to be an assistant coach. Johnson and the others helped put in the lineup and handled discipline. However, they did not have many problems, leaving Allworden to coach.

“Lonnie Morken did something for me, like 10 years ago. He put my name in for the Breaking Barriers award. I was honored at the State Capitol,” receiving the honor in 2007. The award is sponsored by the Minnesota Coalition for Women in Athletic Leadership, National Girls & Women in Sports Day – MN (NGWSD). “It was an important presentation for me.” “It was one of the last things my parents were able to be at. My mother, dad, and brother all come to the cities to see that presentation.”

Johnson expressed what everyone was thinking, “We still have more to do.”