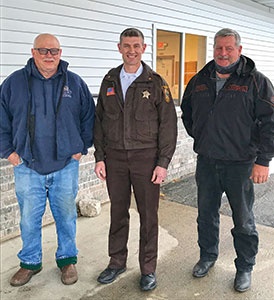 Sheriff John DeGeorge made a second presentation in his “Jail Tour” of Fillmore County at the Rushford Village meeting March 16. DeGeorge plans to visit as many city meetings in the county as possible to share the research and facts with the public; he has already attended the Canton meeting. Throughout his power point presentation, DeGeroge stressed that he wanted public input in the matter. Mitch Lentz, District 1 commissioner and member of the Jail Needs Study and Randy Dahl, District 2 Commissioner who represents Rushford Village on the Fillmore County Board, attended as well to support DeGeorge and share their perspectives.

The current Fillmore County Jail, one of the oldest jails in the state, was built in 1969 according to the regulations put into effect in 1911. (No changes were made to those regulations until 1978.) The jail was built with a single long hall with cells on either side of the hall; as a result it is difficult for jailers to see into the cells. Currently, the jail has no ability to separate inmates based on their 15 different classifications. Locks are all manual, which could cause a problem in an emergency; there are no fire sprinklers in the old building.

The jail also lacks space for programming, indoor recreation, and medical exam or treatment space. There are no temporary holding cells or adequate visiting area. A small room with bookshelves on one wall serves as a library, indoor recreation area and programming area; with multiple uses, the room is often unavailable. An even smaller number storage room is used not only for storage, but also by the visiting nurse, and as a Zoom room during COVID.

The jail has had issues with age and deterioration since before DeGeorge started working there in 1997. Staff has done its best to maintain the building, but it has reached its end life.

In 2003, a jail study was done; an addition was considered and blueprints were drawn up, but the addition didn’t pass. According to DeGeorge, this was a good decision. The jail would have still had the same problems with layout that now need to be addressed. “We didn’t squander resources putting a bandaid on it,” DeGeroge declared.

The current data driven jail study has a diverse group of employees and citizens who have varying perspectives. They are considering four options: total outsourcing, a 72-hour book and hold facility, a 90-day facility, and a 365-day facility. By summer, they hope to have a recommendation for the board to vote on. Once the board makes a decision, a Comprehensive Master Plan will be created.

Commissioner Mitch Lentz commented, “We don’t want the issues that are going on in Winona — we want to be proactive.” Winona has been issued a sunset date by which time they need to either have a new facility or face closure by the DOC (Department of Corrections).

DeGeorge pointed out that Fillmore County already has land available at the current site for a new jail.

Commissioner Randy Dahl added that the county also has fiber optics for communication between the courthouse and jail that can be used in a new building. Dahl went on to explain that the remodel hadn’t been done before because there were other necessary projects at that time and the board hadn’t wanted to burden the taxpayers.

When asked how long the DOC will give the county, DeGeorge responded that as long as they are working toward a solution, the DOC will work with the county.

Lentz told the council Fillmore is not planning on building a 200-bed jail; they will use the data from the jail study with a little future growth added to build the appropriate size facility.

DeGeorge added, “We’ve not outgrown our jail.” During the meth lab boom years, some counties built jails that actually are too large. Fillmore County’s jail would probably be half the size of the Houston County Jail — around 32 beds. According to DeGeorge, jail population is cyclical.

The new jail would have the cells in pods with the jailer station in the center so all cells could be observed. There is no plan for a food service; the current requirements are too stringent, needing a professional dietician and foods to satisfy religious considerations.

If inmates need to be housed out of the county, more deputies are required to transport them back and forth. The charge of $57.50 a day only covers food and bed; Fillmore County would still be responsible for transporting the inmates. A large percentage of the jail population have jobs; if they are housed elsewhere, they can’t get to work.

Randy Dahl pointed out that DeGeorge has a successful Sentenced to Serve program and that part of jail is probation as well. These are best accomplished when the inmates are housed within the county. DeGeorge added that successful probation keeps people out of jail.

Dahl told the council that this will ultimately be a board decision; there will be no vote, calling it an unfunded state mandate. He added, “When it’s the right thing to do we’re (the county commissioners) usually on the same page.

DeGeorge closed his presentation by urging people to contact the commissioners and him with any input, questions, and comments.

After a public hearing, the council approved a variance application from Michael Machutt for a new home with less than 1,000 feet from Dave Lind’s feedlot.

They also heard about new permits issued by planning and zoning for home improvements by Charlie Merchlewitz, Mike and Patty Ebner, Jack Hedin, and Jeff and Dee Jackson. The Featherstone Interim Use Permit was also renewed.

The next meeting of the City of Rushford Village Council will be April 6, 2021, at 7 p.m. The public is welcome.

• Spring Grove School Board, Media Center, and via Google