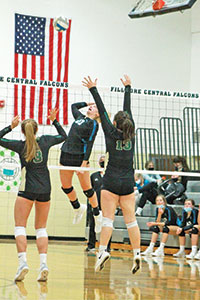 It was a shortened year of volleyball with no post-season, but two of the three ‘‘Journal 10” squads from the TRC had excellent seasons and boasted a trio of All-Conference picks.

Fillmore Central boasts a pair of repeat picks in seniors Maddie Krage (5’6” OH) and K.J. Corson (5’3” libero).  Krage was the Falcons’ go-to hitter.  She was one of the best in the TRC at powering down shots.  The senior leaper had a team-high 142 kills on .262 hitting.   Krage averaged 4.4 kills/set (second best of all “Journal 10” athletes).  She hit for double-digit spikes in all but one match, including posting a season-high 26 versus Chatfield.  Only Kingsland’s Ellie Buchholtz had more kills in a match of “Journal 10” athletes.  Corson concluded her fourth year of starting on varsity for Coach Travis Malley. FC’s libero led the team with 181 digs while also serving at a team-best 98.4% (125 for 127).  K.J. had four 20-plus-dig matches and hit double-digits nine times.  For her career, she (unofficially) registered 1,391 digs.

Posting its first winning season since 2005 were the Chatfield Gophers.  As a result, Molly Thomas’ group also gets three All-TRC picks.

Senior Paige Erickson (5’9” MH) and junior Peyton Berg (5’6” junior OH) each are repeat All-TRC selections.  Erickson, a four-year player, again scored in multiple ways, notching a team second-best 87 kills, a team-best 34 blocks, adding 13 aces.  Erickson had a career-high 20 kills versus R-P.  After mainly playing libero as a sophomore, Berg was Chatfield’s best all-the-way-around player as a junior.  She registered a team third-best 58 kills, a team-best 132 digs, plus 13 aces.  Berg thrice had 25-plus digs in a match.

After being HM as a sophomore, lengthy junior Zayda Priebe (6’0” MH) earns her first All-TRC selection.  Priebe was a major force, scoring a team-best 118 kills plus a team second-best 25 blocks.  She hit double-digit kills five times including a season-high of 21 versus St. Charles.  Rounding out Chatfield’s post-season honorees are All-TRC HM selections, senior four-year contributors Abi Hinckley (5’4” DS/libero) and Mollie Henry (5’7” OH).  Hinckley had a team second-best 89 digs, Henry 37 kills.  Chatfield’s girls worked hard for their season.  The Gophers went 5-1 in the TRC and 7-4 overall, sharing the league title.  But they played in seven matches that went four or more sets, winning all seven.  They went 0-4 in three set matches.  The Gophers also stayed as clean as any team in the TRC as it relates to COVID, playing right up until the season was cancelled.

Rushford-Peterson’s season wasn’t fruitful as FC and Chatfield before it.  But Nikki Schultz’s Trojans battled defensively and served well.  They get a pair of All-TRC picks in Alyvia Eide (5’6” libero) and