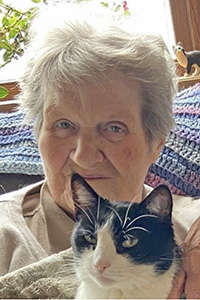 Thora was born on November 12, 1935, in Norway Township of Fillmore County, Minn., to Wilhelm and Dora (Solem) Magelssen. She was a 1953 graduate of Rushford High School. On September 25, 1954, Thora was united in marriage with Richard Lombard at Highland Prairie Lutheran Church in rural Peterson, Minn. Thora and Richard raised their eight children in Bratsberg, south of Rushford. She loved everything about being a mother and homemaker. Thora was a very talented cook and made the very best comfort food. She worked at Norseland Lefse in Rushford for 26 years where she made many, many rounds of lefse. The lefse could never be too thick or too thin, Thora made sure it was always just right. She ran her own in-home daycare for many years. Thora was known for her great love of animals. She loved her many cats and dogs and feeding the birds. She was a member of Highland Prairie Lutheran Church.

She was preceded in death by her parents, husband, daughter Liz, and two brothers, Roald and Leif Magelssen.

There will be a funeral service for Thora at 12 p.m. on December 11, 2021, at Highland Prairie Lutheran Church, with the Reverend Luther Mathsen officiating. Burial will be in the church cemetery. Visitation will be from 10:30 a.m. until the time of the service at the church.

Please leave a memory of Thora and sign her online guestbook at www.hofffuneral.com.