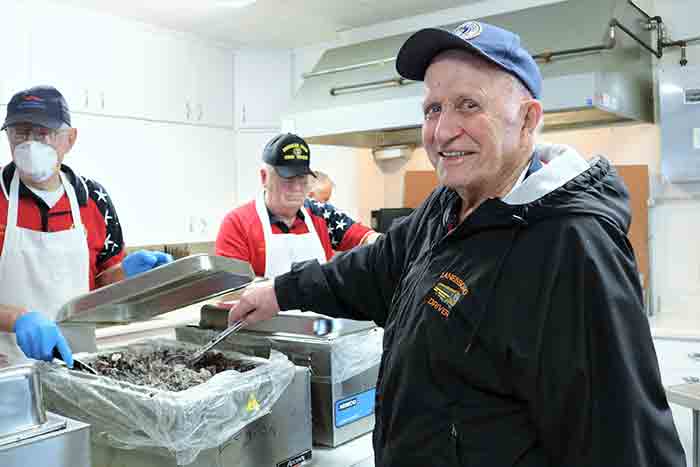 The annual Norwegian Klub & Chili Feed took place at the Lanesboro American Legion in Lanesboro, Minn. on Saturday, February 19, with many people attending the rare occurrence of blood klub being served in Fillmore County.

Finding klub in the area may get even more difficult according to organizer of the event, Robert Thompson, who is ready to hand over the reins to somebody else after running the Norwegian klub event since its inception over four decades ago.

Thompson states that the first record kept of the event was in 1981, but he believes it has actually been taking place between 40 and 50 years. It didn’t start out as an annual event, but it became one because of its popularity.

“A bunch of us started it just to serve it to the old people and it kind of caught on,” explains Thompson.

Although the Lanesboro American Legion has been hosting the klub for many years, it began with a group of friends.  “It wasn’t just Legionnaires at the time, it was just a group of guys who decided to try it and see how it went,” he says.

Thompson explains that klub is kind of like a sausage in a way.

“We put it in bags and then boil it for nearly an hour – then everything is solid – it goes in as more of a liquid (meaning blood; Thompson prefers to call it “liquid”) then we add flour, pro-barley, etc.,” along with the meat, which is both beef and pork, explains Thompson.

“We take the bags off and then we cube it up and then we put it in there and put whole milk on it,” he states.  “It’s a recipe our moms handed down to us,” adds Thompson.

When asked if people either love klub or hate it, Thompson replied “well, they grow up with it” so they are accustomed to it.

“Some people acquire the taste, but very few!” says Thompson.  “Different ones have brought their children, but most of the kids don’t care for it that much either,” he says.

“The reason is, people don’t know it,” Thompson explains. “Years ago every farm used to butcher on the farm and everybody made this,” he notes.  But, “they used everything back then,” recalls Thompson.

Despite the fact that many people do not care for klub, the event has only grown over the years. “The first year I think we served probably 20-25 people,” says Thompson.  So each year they started using more material as the size of the event grew.

They added the chili so everyone would have something they are accustomed to eating, which has drawn in more people to the klub feed.  And the chili has been a big hit.  This year’s Norwegian Klub & Chili Feed featured regular klub and fried klub, chili, side pork and homemade bread.  They also sell klub sticks which are approximately the size of summer sausage.

After decades of organizing the klub feed, Thompson, age 92, has decided he is ready to turn the leadership role over to someone else.

“It’s a lot – it’s a bigger process than people think,” he explains. “We make the klub and it’s gotta be handled right,” adds Thompson.  “Thursday is the biggest day. When we make the klub – it’s a complete day,” he comments.

When asked if the Norwegian Klub & Chili Feed will take place next year, Thompson replies “I don’t know” adding that nobody wants to take it over, so he is unsure what will happen.

“The guys tell me they aren’t going to do it, so if I don’t do it, it may be the last one,” says Thompson.  “I told them I would help but it gets to be too much,” he explains.

Thompson commends all of the volunteers that help with the event and says, “Without them you couldn’t do it.” So the future of the klub feed is in jeopardy.

Thompson says his favorite part of the day is “the getting together” and the camaraderie between everyone.

“But so many of the guys we started out with are gone – so that part of it is kind of hard,” states an emotional Thompson.

Thompson has made many friends over the years while active in the Lanesboro community in many ways, including being a member of the American Legion for over 70 years, being active with the historical society for several years, on the bank board in the past as well as being a member of the Union Prairie church board.